Ordinary human beings are curious about learning the subtle cause-effect relationship of events taking place in the world around them or in their life.

According to Maharshi, Paratpar Guru (Dr.) Athavale’s mission is incarnate in nature. Hence, the curiosity in Him is for the welfare of society.

Some people who suffer from spiritual distress visit imposters and fake tantriks to get their distress cured, thus wasting their valuable time, energy and money.

Spiritual remedies invented by Paratpar Guru (Dr.) Athavale are free-of-cost and simple. Hundreds of people have experienced the effectiveness of these spiritual remedies.

Even if we express immense gratitude unto Paratpar Guru (Dr.) Athavale, who has invented these spiritual remedies, it will not be enough !

Learning about the spiritual remedies due to His curiousity !

After starting spiritual practice, I realised, due to my curious attitude, that the reasons for illness is not only physical and psychological, but spiritual as well. Then, I understood the importance of removal of personality defects and ego process in spiritual practice.

By getting rid of personality defects and ego, an individual becomes sattvik (Spiritually pure) and then most of his psychological distress gets eliminated. If the distress is not getting cured, I learnt that the cause is spiritual in nature; for example, some blockage in the Kundalini-chakras and distress caused by negative energies, and performing spiritual practice is the only way to cure them.

When at the age of 44, I was convinced about performing spiritual practice rather than working as a Clinical Hypnotherapist, I became a full-time disciple of my Guru.

Later, when I progressed in spiritual practice, I could study subjects such as what are the different types of negative energies, how they function, what is their effect on humans and the environment, why do they cause distress to humans and symptoms of such distress, etc.

I could invent new and unique spiritual remedies to eliminate the distress caused by negative energies. For example, alternate chanting of two different Names, placing sattvik pictures of Deities or Name-strips on the Kundalini-chakras of the body. I could also invent various remedies for treating physical, psychological and spiritual problems of humans. For example, Empty-box remedies, Pranashakti flow remedies. Many Texts have also been published on these remedies. This was possible only due to my curious attitude. 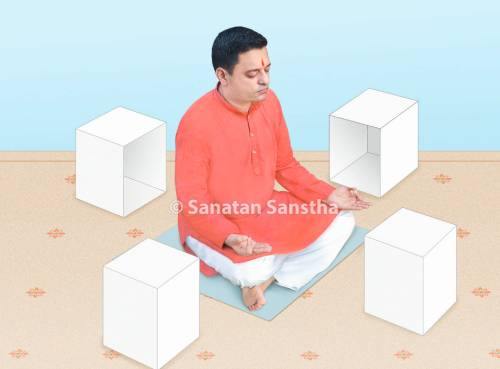 Chanting of words like ‘Shunya’, ‘Mahashunya’, ‘Nirgun’, ‘Om’ as well as ‘0 to 9’ numbers can also help in treating ailments. Numbers chanted in Sanskrut are more effective. To increase the effectiveness of chanting a Deity’s Name, prefixing or suffixing the chant with 1 or 2 ‘Om’ as well as doing alternate chanting are novel spiritual remedies. Paratpar Guru (Dr.) Athavale’s mission is incarnate in nature. Hence, the curiosity in Him is for the welfare of society !