O’ Shrimannarayan ! You have taken birth on earth only to reinstate Dharma. As per a saying – ‘Deity Shiva bestows knowledge and Deity Janardhan bestows liberation’, You have such an intense desire to lead seekers to Moksha that  You have established Maharshi Adhyatma Vishwavidyalay in severe Kaliyug to impart them the Knowledge of Spirituality.

You are also teaching seekers theoretical and practical aspects of Spirituality and getting them to perform spiritual practice specific to all four Yugas (Eras) and relentlessly leading them to perfection. For this, you are restoring the culture of Yajna which is an important and inseparable part of Sanatan Dharma.

Whole of mankind is indebted to You for this and seekers offer gratitude a million times unto Your Holy feet.

In today’s 21st Century, the young generation think Yajna to be an act which is performed only during birth, death and marriage. Some people are familiar with a few other Yajnas such as Navachandi Yaga or Ganesh Yaga performed in temples. Most Hindus are not aware of various types of Yajnas.

2.  Restoring the tradition of Yajna

Sanatan Sanstha has performed 220 Yajnas till 2019. Seekers in Ramnathi Ashram are blessed to witness all Yajnas and participate in chanting during these Yajnas. Shrisatshakti (Mrs.) Binda Singbal, Shrichitshakti (Mrs.) Anjali Gadgil, some Saints and seekers have been fortunate to perform these Yajnas. Seekers acquired invaluable theoretical and practical knowledge about Yajnas. They could experience the benefits and effects of these Yajnas. We may forget knowledge acquired from reading; however, the knowledge gained from experiences is unforgettable since it creates an indelible imprint on the mind.

3A. Importance of resolve : The resolve or intent in performing a Yajna is important. By performing Yajna, the Deity gets pleased and fulfils our resolve. As a result, the desired objective is accomplished. Sanatan Sanstha has performed these Yajnas for the welfare of the world. These were performed with the resolve of averting Mahamrutyuyoga of Paratpar Guru (Dr.) Athavale by blessing Him with a long and healthy life, to establish the ‘Hindu Rashtra’, to eliminate the spiritual distress of seekers and for their spiritual progress through better spiritual practice.

3B. Significance of Purnahuti : Purnahuti refers to the oblations made during a Yajna to the respective Deities to make up for any shortcomings and ensure the completeness of the Yajna. This is done by offering a coconut and pouring ghee in the Yajna.

3D. Significance of surrendering every-thing unto the Guru’s Holy feet : In Sanskrut there is a phrase – ‘Idam na mama’, meaning ‘This is not mine’. It has been got done by God only. The underlying concept in this phrase is – Whatever I have done with my body, mind and senses is not for my benefit alone, it is Brahmarpanamastu (May its benefit go to everyone). In this way, at the end of the Yajna, we surrender its doership unto the Holy feet of Shri Guru by sacrificing the fruits of karma.

3E. Importance of Gurukrupa : No matter how many obstacles there were in the Yajna, they were overcome by Gurukrupa (Grace of the Guru). While performing Maharudrayaga, there were many obstacles in the subtle dimension. There was a lot of pressure at the site of Yajna, and pressure increased from the Sahasrara-chakra to the Anahat-chakra. The priests had no idea how to continue. It was difficult for the priests to recite the mantras. Then, Sadguru (Dr.) Mukul Gadgil began chanting. Seven empty boxes were placed at the altar (as a remedy of the Ether Principle). One coconut each was offered to Deity Datta and Deity Kalbhairav, under the guidance of Vinay Guruji from Karnataka. Then the pressure in the environment vanished and Chaitanya increased. The Yajna was completed smoothly.

4B. Even after using chillies for oblation, no one suffered from dry cough : Even if 1-2 chillies fall in the fire, dry cough cannot be controlled. For the Saptadevata which were guarding the site of Yajna for Shri Ugrapratyangira, oblations included red chillies with turmeric and kumkum. Lots of chillies were burnt every day for 3 days; however, no one experienced dry cough. This showed that there was a great black covering around the Yajna. The Yajna fire kept burning despite the absence of ghee in oblations.

He recited these with a lot of faith, which was possible only due to Shri Guru’s grace, experienced by seekers. In the absence of Shri. Vaze Guruji, Shri. Amar Joshi, Shri. Siddhesh Karandikar, Shri. Ishaan Joshi and other priests (seekers aged 20-30 years) shouldered the responsibility successfuly.

4D. Spiritual experiences in the context of Shrisatshakti (Mrs.) Binda Singbal : Figure of a lotus appeared on the forehead of  Shrisatshakti (Mrs.) Binda Singbal, Her hair were shining and Her Sahasrar-chakra appeared to have awakened. At the time of Purnahuti and Arati, a mysterious liquid secreted from Her feet and the imprint of wet feet were visible on the ground. Seekers had hundreds of such (at the physical and subtle level) experiences, thus enhancing their faith.

Subtle analysis of various rituals is an invaluable gift from Paratpar Guru (Dr.) Athavale to the mission of Hindu Dharma

Paratpar Guru (Dr.) Athavale has said, “What is perceived from the subtle dimension is more important than that perceived at the level of the five senses, mind and intellect’.  With the inspiration and grace of Paratpar Guru (Dr.) Athavale, many seekers began to understand the events taking place in the subtle dimension. He published these events. This gave a new perspective to society on the rituals in Hindu Dharma. As a result, society realises why should rituals be taken seriously. Never before has there been such a detailed spiritual study of rituals in Hindu Dharma.

Spiritual research conducted with the help of various scientific instruments 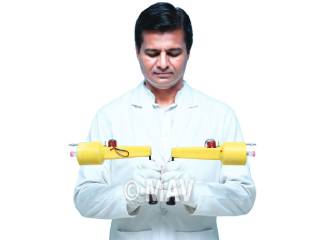 Highly evolved Saints who can perceive the subtle dimension can accurately identify the vibrations of each element, and the knowledge they impart is also treated as evidence. However, nowadays, only knowledge proved through modern scientific tests seems to be acceptable to people. Therefore, while conducting spiritual research, Paratpar Guru (Dr.) Athavale has carried out experiments with modern scientific instruments like ‘UAS’ (Universal Aura Scanner), PIP (Polycontrast Interference Photography), ‘Thermal Imaging’, etc.

Spiritual research was conducted with scientific instruments under the guidance of Paratpar Guru (Dr.) Athavale on various conducts in Hindu Dharma such as – What are the good effects on an individual at the spiritual level of wearing dhoti-kurta (by men) and saree (by women), religious practices such as offering Namaskar, social activities such as lighting lamps,  how to obtain Chaitanya (Divine consciousness) through Yajna, recital of mantras, etc.

What is perceived from the subtle dimension is more important than what is at the level of the senses, mind & intellect !