To avoid such natural calamities that befall the country and to avoid them, it is imperative that everyone does sadhana ! 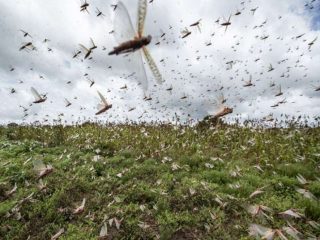 New Delhi – As the corona crisis in India continues to escalate, another major crisis is looming. In some States of the country, crops ready for harvesting have been attacked by locusts. After attacking crops in Rajasthan and Madhya Pradesh, the locusts are now moving towards Uttar Pradesh. Against this backdrop, the entire State of Uttar Pradesh has been alerted. Locusts enter India from Pakistan and other parts as soon as the wind changes. In the rainy season, these insects reach India from Pakistan.

2. According to Uttar Pradesh Agriculture Department officials, a large group of locusts can damage several acres of ready crops in an hour. They will be chemically sprayed. Agra district administration has prepared 204 tractors for chemical spraying.

What is a locust?

Locusts are a type similar to grasshoppers. These short-horned pests cause severe damage to crops every year. Among them, in India, desert locust, migratory locust, Bombay locust and the tree locust, damage the major crops.