Organising activities for ‘Hindu Rashtra Jagruti’ across the country 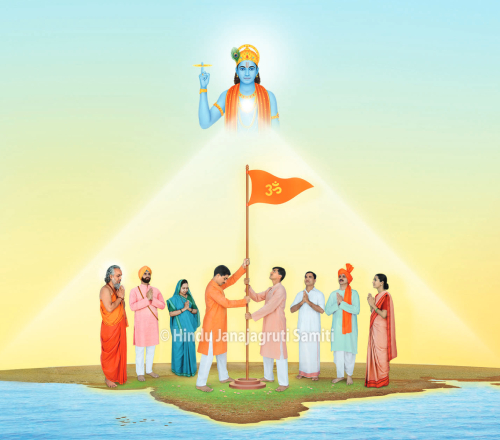 Hindu Janajagruti Samiti (HJS) has been working incessantly for the past 20 years with the aim of establishing the ‘Hindu Rashtra’. HJS completes 20 years on 26th September 2022. On this occasion, ‘Hindu Rashtra Sankalpa Abhiyan’ will be launched across the country by HJS. The period of this Abhiyan (Campaign) will be – 31st August to 8th November 2022. The campaign will be launched by offering a coconut and a garland of flowers at Shri Parashuram Temple in Chiplun (District Ratnagiri, Maharashtra). Chhatrapati Shivaji Maharaj performed Mahapuja of Shri Parashuram before his coronation. Samartha Ramdas Swami built a south-facing Hanuman Temple in front of Shri Parashuram Temple. Mr Ramesh Shinde (National Spokesperson of HJS) has said that commencement of various activities of ‘Hindu Rashtra Sankalpa Abhiyan’ at such a pious place can be considered auspicious.

Various activities in the campaign to establish the ‘Hindu Rashtra’

In 2002, a renegade organisation organised a programme to mock Hindu Deities. The Hindu organisation that sprung up against this programme has grown like a Banyan tree in 20 years. Due to conti-nuous awareness over the last 20 years to prevent the denigration of Hindu places of worship, it appears that Hindus have become active not only in Maharashtra, but all over India. Various activities are conducted by HJS throughout the year on the basis of five aspects – Education on Dharma, Awareness on Dharma, Hindu Unity, Protection of the Nation and Dharma. All this is happening due to God’s grace, the blessings of Saints and active participation of devout Hindus.

History is witness to the fact that wherever Hindus have been converted, that region has become unstable !