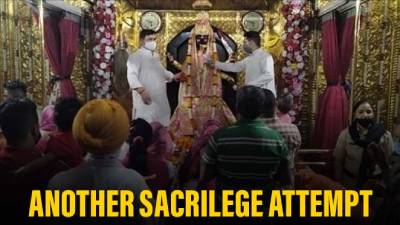 Patiala (Punjab) – The young man trying to sacrilege the Idol in the historical Shri Mahakali Temple here has been arrested. On the afternoon of 24th January, this youth suddenly climbed upon the raised platform (Chouthara) by jumping over the barriers in front of the Idol; the priest present there in the enclosure overpowered the culprit and pushed him down. Devotees present there caught him, beat him up and later handed him over to the Police. Hindu organisations took out a protest rally on the issue on 25th January by keeping the city closed. In December last year, a man humiliating the Guru Granth Sahib in Golden Temple at Amritsar here had got killed due to being beaten up by the people.

In another sacrilege attempt case in Punjab, the police in Patiala have nabbed a 23-year-old accused for allegedly making an attempt of sacrilege at Shri Kali Devi Temple in Patiala. #Video #Punjab #Sacrilege #KaliDeviTemple pic.twitter.com/P7Td87APbu

2. Devotees present in the temple told the Police that the youth had also tried to embrace a lady devotee there.

3. Delhi Chief Minister Arvind Kejriwal called that incident to be reprehensible. Some days back such an effort of humiliation was made in the Harmandir Sahib also. It is essential to expose the conspirers of these acts.

4. President of Punjab Pradesh Congress Committee Navjot Singh Siddhu said on Twitter that attempts are being made to spread fear, polarisation, hatred in Punjab.

Politics of fear , polarisation and hate is intruding Punjab …The incident of sacrilege at Mata kaali Devi temple is deplorable, divisive forces can never tear into the socio – economic fabric of Punjabiyat .. our armour is universal brotherhood and respect for all religions

These kinds of disruptive forces will never be able to break the social and financial structure in Punjab.