From this, the instigators of Delhi riots should be clear ! Realise that these Islamic countries are the ones which were trying to hold Hindus responsible for the riots ! 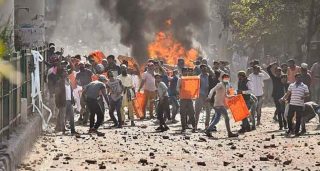 New Delhi – Delhi Police investigation has revealed that remittance of funds for opposing the Citizenship (Amendment) Act (CAA) in Delhi in February 2020 and the subsequent riots were manipulated from the Middle-East Islamic countries UAE and Oman. Although, it is still not clear whether funds were sent for the protests against CAA or the riots. Further investigation is underway.

During the investigation, the Police found Rs. 2.5 lakhs in the house of one of the riot accused, Meeran Haider (Age 35). He is a Ph.D. student at Jamia Millia Islamia University. The Police said – Rs. 5 lakh were deposited in his bank account in February 2020 before the Delhi riots.

In the case, the Police have also arrested Khalid Saifi, who had met Dr. Zakir Naik, a role-model of jihadi terrorists, in Malaysia.