Why do we need a religion based parallel Halal economy in secular India ? 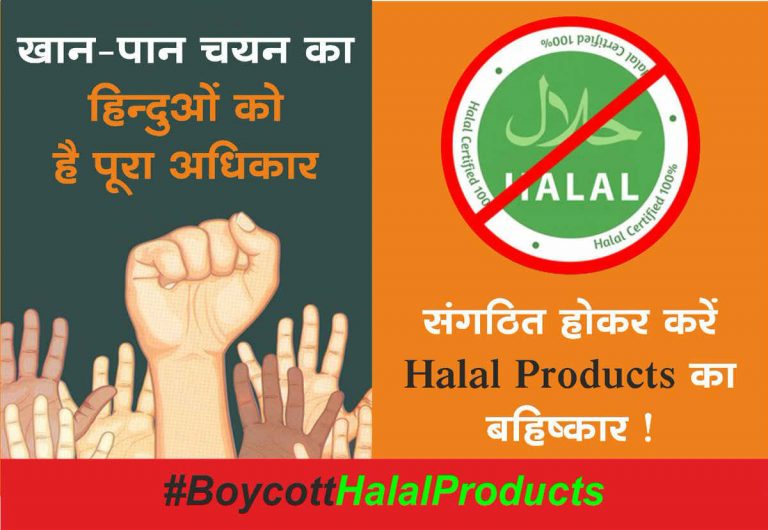 Mumbai – The Arabic word Halal means ‘Valid according to Islam’ ! Originally, a demand kept in the context of meat, ‘Halal’ is now demanded in many things, including vegetarian food, cosmetics, medicines, hospitals, household items and even malls. For this, it has been made mandatory to obtain a ‘Halal certificate’ from private Islamic organisations. In secular India, is it necessary to obtain a private Islamic certificate after obtaining a certificate from the Government’s Food Safety and Standards Authority of India (FSSAI) ? Muslims constitute only 15% of the population in India. Why is then ‘Halal Certificate’ being imposed on the remaining 85% Hindus ? Most importantly, crores of rupees earned through ‘Halal certification’ is going to Islamic organisations instead of Central and State Governments. Few Islamic organisations are providing judicial help for rescuing religious fanatics caught up in terrorist activities. They even oppose the Citizenship (Amendment) Act (CAA) passed by the Central Government. A religion-based parallel economy in secular India is a threat to National security. Hindu Janajagruti Samiti (HJS) has appealed to the Government to immediately stop the practice of ‘Halal certification’ and the citizens of India to boycott ‘Halal-certified’ products.

Ramesh Shinde further said, “Most shockingly, the previous so-called secular Government allowed Government establishments like Indian Railways, Air India and Tourism Corporation to make Halal mandatory, which is still going on. Even the pure vegetarian snacks of the well-known ‘Haldiram’ have now become ‘Halal-certified’. Nuts, sweets, chocolate, grains, oils, soaps, shampoos, toothpaste, mascara, lipstick; McDonald’s burgers and Domino’s pizza are all Halal-certified. ‘Halal Certificate’ is mandatory on products exported to Islamic countries; however, why is it needed in a Hindu-majority India ? If things are going to be like this, it won’t be wrong to say that India is moving towards ‘Islamisation’.

While the Government of India has a ‘Food Safety and Standards Authority of India’ as well as a ‘Food and Drug Administration’ department in many States, why do we need so many Islamic organisations issuing ‘Halal Certificates’ ? Each trader is initially charged Rs. 21,500 for issuing ‘Halal Certificate’ and Rs. 15,000 for its annual renewal. Hindu Janajagruti Samiti wants to stop this parallel economy from growing further in India. For this, Samiti is creating awareness through meetings of industrialists, lectures and social media across the country on topics like ‘Futility of Halal in India’.

In a secular India, is it necessary to get a private Islamic certificate after obtaining a certificate from the Government’s FSSAI ?