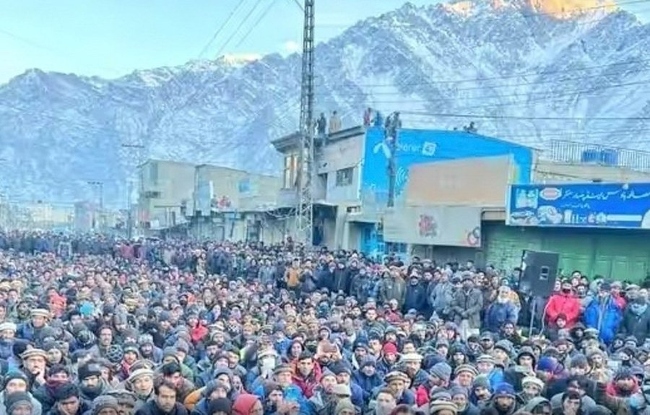 New Delhi – People of Gilgit-Baltistan in Pakistan Occupied Kashmir have been protesting against the Pakistan Government and army for the last 12 days in the backdrop of economic crisis in Pakistan. They demanded that ‘Gilgit Baltistan be reunited with Kargil District of Ladakh in India’. ‘The Government of Pakistan is discriminating against us, but now we will take the decision of Gilgit-Baltistan ourselves’, they said.

“There’s no electricity here for 18 hours, almost daily & people who don’t pay electricity tax are getting to enjoy the amenity,” says a protester pic.twitter.com/IYPL7EIgJo

1. Videos of protesting people are also coming out. In which the protestors raised slogans like ‘Aar-par jod do, Kashmir ka dwar khol do’ (Open the gates of Kashmir and connect this land with beyond areas). The protestors have taken the stand that ‘Pakistan Government will not take our decisions and neither we will let them do so’.

2. Local people allege that people from Punjab and Khyber Pakhtunkhwa are encroaching on their land. These people are supported by Pakistani soldiers. Soldiers are being deployed for their security. The Pakistani army is grabbing people’s land to earn money illegally. The citizens are also demanding India’s intervention on this issue.

3. The people of Minawar village who are protesting against the Pakistan Army are also getting support from the surrounding areas. Many protesters say that even if the army shoots them, they will not allow them to take control of the land. Pakistani army comes and beats us. Hundreds of acres of our land has been grabbed by the army without any compensation. Now we will not give them even an inch of land. The army is taking over our houses and farms. Army will be responsible for any untoward incident.