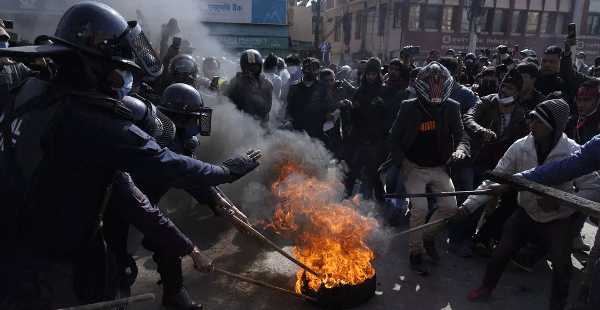 Kathmandu (Nepal) – A US Government aid agency, The Millennium Challenge Corporation (MCC) had agreed to provide billions in grants to fund an infrastructure project of a 300-kilometre (187 miles) electricity transmission line and a road improvement in Nepal in 2017. This project was presented in the Nepal Parliament on 20th February 2022 for ratification. The Nepali people opposed this infrastructure project and staged a protest. During the protest, Police in Kathmandu fired tear gas and water cannons to disperse protesters. Some protesters were injured in the clashes with police.

Nepali Government officials said since the financial aid is in the form of grants, it will not have to be repaid and has no conditions attached.

However, the opponents objected saying the agreement would undermine Nepal’s laws and sovereignty as lawmakers would have insufficient oversight of the board directing the infrastructure project.

The US Embassy in Nepal said the project is a gift from the American people to Nepal.