India is surpassing Pakistan, Nepal and Bangladesh in malnutrition ! 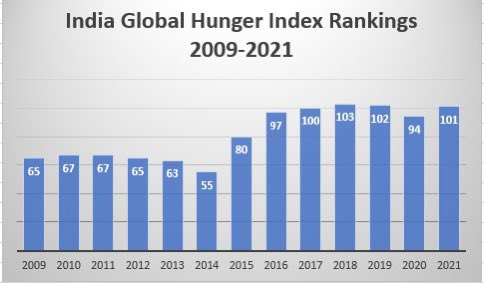 New Delhi – India has slipped to the101st position in the Global Hunger Index (GHI) 2021 of 116 countries. Last year, India was in 94th position, which means, it has slipped by 7 positions. It is behind Pakistan, Bangladesh, and Nepal. According to the joint report published by the Irish Aid Agency ‘Concern Worldwide’ and Germany’s ‘Welthungerhilfe’, there is a mention about India’s hunger level being of great concern.

Only 15 countries fare worse than India.https://t.co/KW2QpBPRf4

The position achieved by Nepal is 76, Myanmar 71 and Pakistan 92. Although the state of hunger is of great concern in these countries also, they have surpassed India. They have done well, compared with India, in providing food to their citizens.