Had Gandhian India resorted to such tactics, not only the terrorism in India would have ended long ago, but also Pakistan would have been split into fragments ! 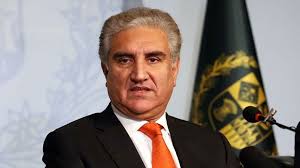 Qureshi further said that India had attempted to infuse nationalism in Gilgit-Baltistan before the elections and that India has malefic intentions post elections too. India is using its land to spread terrorism in Pakistan, while Afghan territory is used for launching attacks on Pakistan due to which Pak may see the surge in terrorism within the country in the future. India is violating the UN treaty, the Vienna convention and three other international treaties. India is also building the momentum to put Pakistan in FATF’s (Financial Action Task Force) blacklist.

The spokesperson of Pakistan army has alleged India of being the driving force behind the terrorism in Pakistan and assisting the Balochistan Liberation Army, Balochistan Republic Army and Tehrik-e-Taliban. Indian embassy official named Rajesh in Afghanistan has laid a plan to carry out large scale terrorist attacks in Karachi, Lahore and other big cities of Pakistan. He also alleged that the terrorist organisations are assisting India and India has established Islamic State’s branch by the name ‘Daesh Pakistan’ inside Pakistan.