Congress party ruled the country for the maximum period. What have they done for the progress of workers during that period ?Even now also, the Central and State Governments will be footing the railway fare of migrant workers. Therefore, Congress party is just making capital of this issue to display their fake concern over the interests of workers. The people are aware of it. 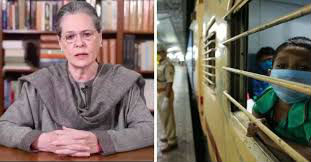 Sonia Gandhi attacked the Government for not giving stranded migrants free train rides home when ‘100 crores’ was spent on just one event in Gujarat during the Trump visit and Rs 151 crore had been contributed by the railways to the PM-Cares fund.

“What the Congress President has said doesn’t change much on the ground, because railways is already paying for 85 per cent of the fares. Instead of the party, it would have been better if she would have instructed her State Governments to not indulge in politics and pay their share”, the Government sources said.