Do students come to study or perform religious activities ? Those who disobey school rules should be rusticated ! Bagalkote (Karnataka) – In accordance with the ongoing Hijab row in Karnataka, 6 students in a Government school offered Namaz inside the school premises in Ilkul, Bagalkote. The controversy erupted when the locals of Ilkul town opposed the students being allowed to offer Namaz.

As per reports, the Ilkul school Principal had clearly directed the students that they can’t offer Namaz in the classrooms or in the school, yet the girls offered Namaz in the corridor area when the teachers were busy having their lunch. The locals have questioned the school management over this.

While the video of the girls offering Namaz went viral over the social media, a similar incident was reported from a Government school of Kadapa in Mangaluru. The girls there were seen offering Namaz inside a vacant classroom. As tensions prevailed in the town, the Block Education Officer in Mangaluru has sought a report. This is weeks after a school Principal of Bale Changappa Government Higher Primary School in Bengaluru got suspended for allowing students to offer Namaz in the classroom. Around 20 students have offered Friday prayers in their classroom since December 2021, after the headmistress permitted them to do so.

The issue, however, came to light when a video of the incident was shot on 21st January and uploaded on various social media sites on 23rd January. Many locals as well as members of various Hindu organisations protested against the school authorities for favouring children of a particular community.

In an another incident, a video went viral of a few students from the Muslim community purportedly offering Namaz inside the classroom of a Government primary school at Ankathadka in Kadaba Taluka of Dakshina Kannada District.

The video was shot on 4th February, but it came to light when it went viral and the locals came out with objections. In the footage shared, a few young men, allegedly students of the school, were seen kneeling down and touching their heads to the ground while reading Namaz 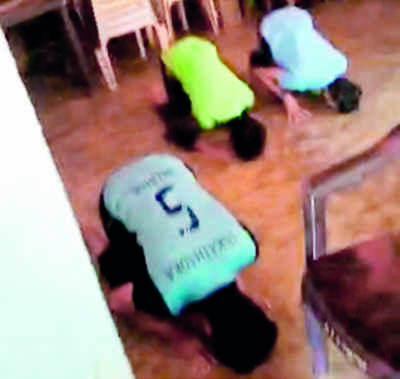 After complaints to the Police, officials of the Education Department visited the school. The school teachers said once the video was brought to their attention, they directed the students not to engage in religious activities inside the classroom.