Life cannot be imagined in the absence of the Sun, which is the only aspect that gives its bright light for survival of life ! 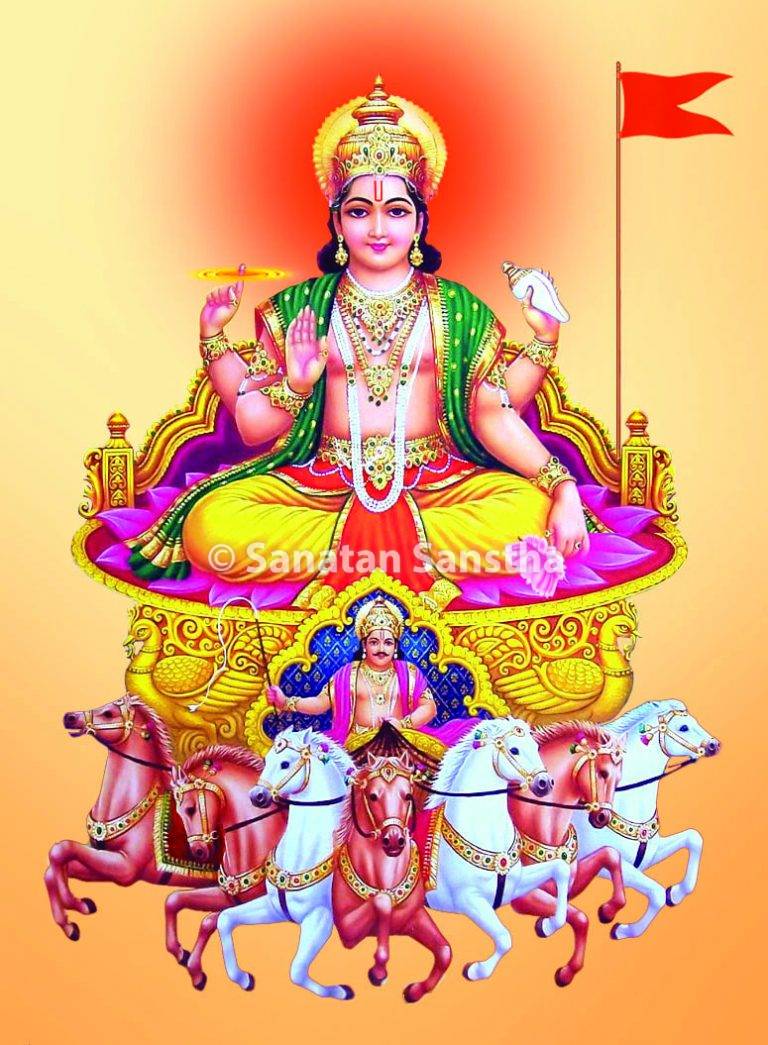 Sun’s northward movement begins from the day of Makar Sankranti. The period from Karka Sankranti (passage of the sun into the zodiac sign of Cancer) to Makar Sankranti is called Dakshinayan. As given in Hindu Scriptures, a person who dies in the Dakshinayan period has a greater chance of going to Yamalok (Southward region), than the one who dies during Uttarayan (Northward revolution).

The date of winter solstice changes gradually due to the Axial precession of the Earth, coming earlier by approximately 1 day every 80 years. Hence, if the Makar Sankranti at some point of time did mark the day after the actual date of winter solstice, a date in mid-January would correspond to around 300 CE, the heyday of Indian mathematics and astronomy.

A. Benefit of highest merit acquired by a Holy dip on the day of Makar Sankranti : The time from sunrise to sunset on Makar Sankranti is auspicious. A Holy dip during this period carries special significance. Those who take a Holy dip in the Rivers Ganga, Yamuna, Godavari, Krushna and Kaveri at the Holy places situated on their banks acquire the highest merit.

B. Importance of making an offering during the auspicious period : The period from Makar Sankranti to Rathsaptami is an auspicious period. Any donation and meritorious deeds performed in this period proves to be more fruitful.

B1. Substances offered on Makar Sankranti : Typically, during these days, an offering is made of new vessels, clothing, food, sesame seeds, pot of sesame seeds, jaggery, a cow, a horse, gold or land depending on one’s capability.

B2. What should be ideally gifted ? : Instead of materialistic objects such as soap, plastic items, etc., gift items complementary to Spirituality, such as incense-sticks, ubtan (Herbal powder), Religious and Spiritual texts, pictures of Deities, CDs on spiritual topics, etc. should be gifted. A. Importance of sesame seeds

A2. Importance according to Ayurveda : Since Sankranti falls in winter, consuming sesame seeds is beneficial.

A3. Importance according to Spirituality

1. Since sesame seeds have a higher ability to absorb and emit Sattva vibrations, consuming sesame balls or bars helps improve spiritual practice. Distributing sesame balls results in an exchange of the Sattva component.

On the day of Makar Sankranti little children and married women wear black clothes. Black is not only considered inauspicious in the Hindu Dharma but according to the science of Spirituality it is known to attract Tama vibrations from the environment. Thus, wearing black can cause distress to the individual who wears black clothes.

Today, when the Nation and Dharma are in peril, flying kites for the sake of entertainment is akin to ‘Nero fiddled while Rome burned’.

If the time spent on flying kites is used for the development of the Nation, it will make the Nation progress faster; and if used for spiritual practice and missions related to Dharma, society and the individual will benefit. Get educated on Dharma to fulfil the purpose of life !