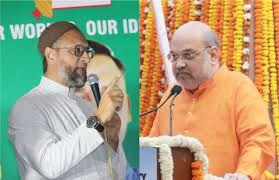 Hyderabad (Telangana) – ‘If you are claiming that 30,000 Rohingyas are listed on electoral lists, was the Home Minister Amit Shah sleeping till then ?, questioned AIMIM Chief and MP Asaduddin Owaisi as a reply to BJP MP Tejasvi Surya’s criticism.  He was talking at a programme.

Owaisi further added that, is it not Shah’s responsibility to check how the 30,000 to 40,000 Rohingyas were entered on electoral lists ? He challenged BJP, if there is a truth in the claims of BJP, the Party should provide the lists of such names by 24th November evening.