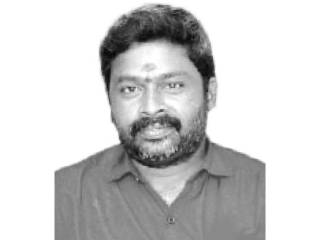 Chennai – Mr. VG Narayanan, leader of Hindu Makkal Munnani and an ardent Hindutvawadi who tirelessly worked for the Hindu cause, raised his voice in protest against assaults on Hindu Dharma and worked for the welfare of the downtrodden Hindus in his area thus preventing conversions died on 1.9.2020 due to a heart attack. He was 36.

He joined Vishwa Hindu Parishad at a young age and started his Hindutva mission. He regularly conducted educative competitions for Hindu children. He was regularly filing complaints against Hindu-haters who attacked Hindu Dharma and made their lives miserable by ensuring that they were summoned by the Courts.

During the Chennai floods, coronavirus spread and other such situations, he mobilised money and materials to provide food and basic necessities to the downtrodden and affected people. He worked in close coordination with Mr. Radhakrishnan of Shiv Sena and Mr. RD Prabhu of Bharat Hindu Munnani. He took part in all activities of Hindu Janajagruti Samiti in Chennai for the past 8 years. On behalf of HJS, Mr. Jaikumar paid floral tributes on his mortal remains and offered condolences.

Hindu Makkal Katchi (HMK – literally meaning Hindu People’s Party), is a devout Hindu party in Tamil Nadu. It also works for the welfare of Hindus in Sri Lanka. HMK believes that ‘Hindu Dharma is not a religion, it is a way of life’, and its objective is to promote Hindutva in Tamil Nadu. Hindu Makkal Munnani is an off-shoot of HMK.