The Hindu festival of Kojagiri Purnima was on 9th October. The Muslim festival Eid-e-Milad was also on the same day. In the processions organised in Mominpur in Bengal, Jodhpur in Rajasthan and Dhule in Maharashtra on this day, Muslims created an environment of rioting.

There was enormous violence and sabotage in Mominpur; whereas, in Jodhpur and Dhule, the slogan ‘Sarr Tan Se Juda (Behead)’ rent the air. The possibility of such incidents having taken place or taking place in future elsewhere in the country cannot be ignored.

Hindu festivals that celebrate the birth of Saints generate Bliss. However, during the birth celebrations of seats of faith of Muslims (Milad-un-Nabi), fanatical Muslims resort to expressing their rage on a large scale about others through malevolent acts. This fact now lies exposed through the abovementioned incidents.

Extensive vandalism of shops and vehicles in Mominpur resulted in so much tension in the area that armed forces had to be called. It is a known fact that the fanatical Muslims attack the processions of Hindus on their festivals; however, the recent incidents have exposed that they trouble Hindus during their own processions also. All these incidents prove but one thing – whenever Muslims gather in large numbers, they trouble Hindus in some way or the other.

Recovery of losses from fanatic Muslims (who damage public property) is also very difficult. The political leaders too are unwilling to demand recovery for fear of losing the vote bank and the Police too ignore it for various reasons.

The huge loss caused during the riots at Azad Maidan in Mumbai is yet to be recovered. Many a times, by the time the report of riots is published, evidence is destroyed. The cases filed in such riots go on for many years and there is every likelihood of this being repeated in Mominpur riots as well. The Government in Bengal is completely pro-Muslim, and hence, there is very little possibility of the Muslim rioters being punished.

When the slogan ‘Sarr Tan Se Juda’ was being shouted, the State Police was very much present at the spot. The truth is that the Police was unable to stop them, or they did not try to stop them. In a nutshell, the fanatics have no fear of law, Police or punishment. In fact, it is the Hindus who always worry about what will happen this time. If Hindus want to change the situation, they have to awaken to the threat at hand, unite and find a solution. There is no other alternative.

These incidents also reveal repeatedly the importance of self-defence training. Lokmanya Tilak kept aside all his activities for a year and gave preference to building his body. These incidents also highlight that the Police and the Government are incapable of protecting the Hindus. Taking this fact into consideration, Hindus have to increase their physical strength to counter the riots caused by fanatic Muslims and the ‘Sarr Tan Se Juda’ type slogans. It is time Hindus realise this.

After arresting the activists of Popular Front of India (PFI), it has been once again revealed that the conspiracy was to bring the whole of India under Muslim rule by 2047. They had devised a plan in the name of ‘Ghazwa-e-Hind’ to fulfil this goal and the security forces have proof in this regard. One may wonder – how come Muslims, who are a mere 14% in India, going to wield superiority over Hindus, who are 80%. However, seeing the speed at which Muslim population is exploding in the States and in smaller areas within the States, their population is going to increase at a tremendous rate; this has been stated by Indian as well as foreign experts. It is our bad luck, that Hindus are divided into castes and sects, and hence, are in various factions. There is no control over the fanatic Muslims, and hence, they dare to raise slogans openly such as ‘Sarr Tan Se Juda’ against Hindus. Even an inconsequential reason is sufficient for the fanatic Muslims to start fighting with Hindus, attacking them and start rioting. In a similar manner, these slogans are also raised as if they are an inseparable part of their celebrations.
The Government in the Hindu majority Nation should immediately prohibit this revolting slogan and warn the defaulters of strict disciplinary action. Further, the culprits who dare to ignore the prohibition and warning should be given strict punishment; else, the Muslims, who today raise slogans of killing Hindus on festival days and when in a mob, might shout such slogans daily from the loudspeakers on mosques. That day may not be far away.

Grabbing lands of Hindus, snatching their houses, taking control of Government lands, making illegal mazars at various places and commencing management of these mazars (meaning, lending a legal shape them), increasing their population in some areas and making life difficult for the local Hindus, offering namaz on roads that lead to traffic jams, attacking forts, ‘Land Jihad’ of the WAQF Board by first making and then twisting of laws during the Congress regime, etc. are all the implementation and manifestation of ‘Ghazwa-e-Hind’.

The heinous form of ‘Love Jihad’ that has spread across the Nation, the anti-national slogans raised from Universities (such as the JNU) and the riots in Delhi that followed were all the implementation of ‘Ghazwa-e-Hind’. Fanatic Muslims are now not only terrorising the society through the medium of slogans such as ‘Sarr Tan Se Juda’, but are going a step ahead and effecting related action. 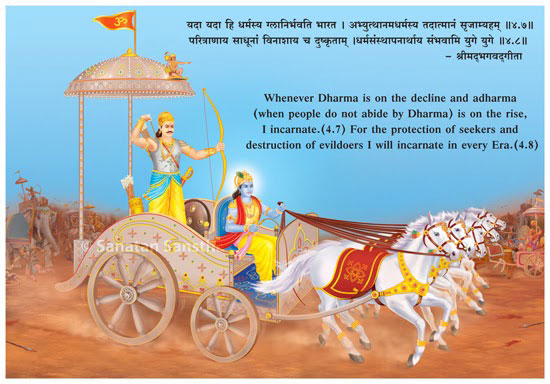 In the past few days, Hindus have actually been killed. If today slogans are raised openly about killing Hindus, how difficult will the coming times be, this is something that needs serious contemplation.

Fanatic Muslims are not only terrorising society through the medium of slogans, but are effecting related actions too !