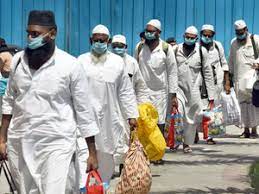 Riyadh (Saudi Arabia) – Dr Abdullatif Al_Alsheikh, the Minister of Islamic Affairs, announced on social media about the ban on ‘Tablighi Jamaat’, a Sunni Islamic organisation. The organisation is called to be the ‘gateway for terrorism’ as well as a ‘threat to society’. The Minister ordered the Mosques to inform the people about it.

Taking to Twitter, Saudi Arabia’s Ministry of Islamic Affairs said, “His Excellency the Minister of Islamic Affairs, Dr.#Abdullatif Al_Alsheikh directed the mosques’ preachers and the mosques that held Friday prayer temporary to allocate the next Friday sermon 5/6/1443 H to warn against (the Tablighi and Da’wah group) which is called (Al Ahbab).

According to the orders of the Minister of Islamic Affairs to the Mosques and Maulavis (Religious leaders of Islam), the following points were covered in his guidance on Friday after Namaz :

1. Inform people that affiliation with partisan groups, including (the Tablighi and Da’wah Group) is prohibited in Saudi Arabia. Tablighi Jamaat misleads people and traps them into terrorism, especially the youngsters.

2. Mention their major mistakes and danger to society they pose.

3. Statement that affiliation with partisan groups, including (the Tablighi and Da’wah Group) is prohibited in the Kingdom of Saudi Arabia

4. People should also know that it will be illegal to maintain relations with Tablighi as well as other dangerous groups.

Saudi Arabia bans Tablighi Jamaat, calls it ‘one of the gates of terrorism’

The Tablighis were accused of being responsible for the spread of the first wave of corona in India !

The Central Government had in fact blamed the group for the spike in cases, after its members were found to have travelled across the country. After the members of this organisation returned to their respective States from the event at Nizamuddin in New Delhi, the coronavirus started spreading rapidly.

When these members were quarantined, there was sexual harassment of the nurses and doctors were brutally beaten up by them.

At some places, the Police who went to chase its members who were hiding in mosques were attacked. The President of this organisation has not been arrested in this case so far.

A brief introduction to the Tablighi Jamaat

‘Deobandi Maulana’ (Islamic Scholar) Muhammad Ilyas Kandhalvi founded the ‘Tablighi Jamaat’, the religious organisation of Sunni Muslims in 1926. This foundation was mainly doing the work of delivering religious speeches to the Muslims. The only objective of this non-political organisation was to convey the ‘5 basic principles of Islam’.

Tablighi Jamaat admits that it attracts all sorts of individuals, regardless of their social and political stances and it doesn’t control its members. This allows its mostly young and ignorant members to be misguided and recruited by other extremely misguided groups that advocate grave worship (polytheism) or extreme Sufism or which advocate individual violence against common people.