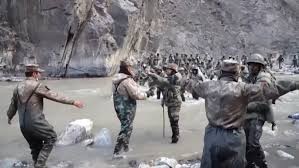 New Delhi – ‘After the offensive confrontation with the Indian Army along the line of control at Galwan valley and at other places, Chinese Army realised that they need to improve the training and preparation’, said Chief of Defence Staff, General Bipin Rawat. He was talking in an interview with ’India Today’. India and China still have strained relations.

Speaking to India Today TV, CDS Bipin Rawat said that Chinese soldiers are mostly enlisted for a short duration and don’t have experience of fighting in the mountain terrain of the Himalayas.#China #Galwan https://t.co/oQCthGwyYq

General Rawat said, ‘Chinese Army is not trained to fight on mountain terrain of the Himalayas and mainly enlisted for a short duration. The Chinese soldiers that were deployed on the border with India have been changed. Chinese Army can fight for a short duration and do not have the experience of fighting in this area. India is keeping a close eye on China’s activities. Indian Army is always ready and has been trained well. In the mountain region, Indian Army is better than the Chinese Army. Northern and western forefronts are important for the Army. Lately, there has been some increased activity on the northern forefront’, said Rawat.