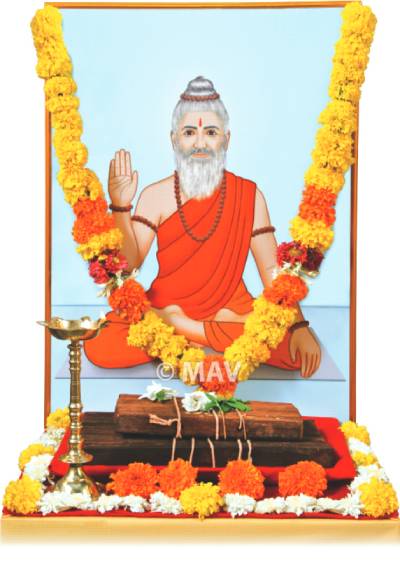 1. The Guru gives His disciple everything he needs in life

A Guru gives His disciple everything he needs in life. He does not give in to the wishes of the disciple. If a seeker is going to get married or is going to have children as per his prarabdha (Destiny experienced in this birth), the Guru does not interfere. The Guru only cautions the seeker about the obstacles that could develop in his / her spiritual practice due to marriage or begetting children after marriage. Man goes to a temple and offers navas (Promising to perform a specific satseva upon fulfilment of his wishes); however, he forgets God after the navas is fulfilled. The Guru-disciple relation is not like this. The Guru gives His disciple everything he needs in life, and additionally, does not leave him till he attains Moksha (Final Liberation). In a similar manner, Paratpar Guru (Dr) Athavale is going to be with Sanatan’s seekers till they attain Moksha.

2. Principles of Shriram and Shrikrushna are present in Paratpar Guru (Dr) Athavale

During the initial phase of Sanatan Sanstha, we Saptarshi have seen Gurudev (Paratpar Guru [Dr] Athavale’s) Kshatratej (Radiance of a warrior) through the medium of His discourses and writings. With utmost earnestness He would also speak through the medium of Daily ‘Sanatan Prabhat’ about the attacks on Rashtra and Dharma in very strong words. He would question everyone responsible for the dire state of the Rashtra and Dharma. Seekers have simultaneously seen in Gurudev – Chakravarti (World conqueror) Shriram and clever Shrikrushna. Sometimes, seekers and devout Hindu activists also cannot answer questions Gurudev would ask about the Hindu Rashtra. Taking into consideration all these aspects, is there any doubt that Shriram (who established Ramrajya in Tretayug) and Shrikrushna (The complete Incarnation who instated Dharma in Dwaparyug) have both descended onto the Earth in Kaliyug in the form of Sanatan Sanstha’s Paratpar Guru (Dr) Athavale ?

3. Every seeker of Sanatan Sanstha has been identified by Paratpar Guru (Dr) Athavale and moulded with lot of efforts

4. The glory of Paratpar Guru (Dr) Athavale described by Saptarshi

The present phase of Kaliyug is such that some people have taken birth only to oppose Spirituality; they leave no stone unturned to torture the devout followers of Dharma. In such a severe Kaliyug, Paratpar Guru (Dr) Athavale is standing tall like a lighthouse, firmly with the seekers and devout followers of Dharma. He is continually involved in the mission of instating Dharma through the medium of a few thousand seekers of Sanatan Sanstha. The seekers of Sanatan Sanstha are very lucky that they have such a great Guru who is Himself at the pinnacle of Kshatratej, who is a pillar of wisdom & detachment and a partial Incarnation of Shri Vishnu.

God communicates some things to mankind symbolically. He does not tell them these things in a clear language. This is termed as a ‘Divine play’. Deity Shiva in His Nataraj form signals through the various mudras (made with the hand) and various facial expressions (bhav). Paratpar Guru (Dr) Athavale also expresses in a similar manner. When Shrisatshakti (Mrs) Binda Singbal speaks to Him about the spiritual practice of seekers, at times He answers by moving His hands and facial expressions. Only Shrisatshakti (Mrs) Binda Singbal understands which answers are in the affirmative and which are in the negative.

7. Shrisatshakti (Mrs) Binda Singbal and Shrichitshakti (Mrs) Anjali Gadgil have taken birth to accomplish a Divine mission and this is all a Divine planning

Shrisatshakti (Mrs) Binda Singbal and Shrichitshakti (Mrs) Anjali Gadgil have taken birth to accomplish a Divine mission. Both came to Paratpar Guru (Dr) Athavale’s Ashram on their own and performed spiritual practice like all the other seekers. This is all a Divine planning. Paratpar Guru (Dr) Athavale never went looking for them, nor did they come to the Ashram looking for Gurudev. Everything happened spontaneously. All this is Divine planning.

Paratpar Guru (Dr) Athavale is standing tall like a lighthouse, firmly with the seekers and devout followers of Dharma !