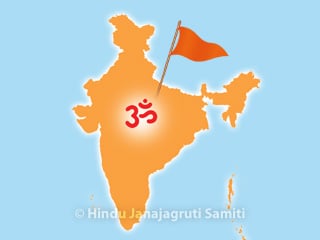 “In the earlier times, schools in India were run in temples. Generally, every village had a temple and a school. According to a report of British officer Thomas Munro, in 1826, there were 1,28,000 schools in South India. The proportion of Brahman, Kshatriya and Vaishya students was 25%, while Shudra students were 65%. There was 1 school for every 1,000 people. The whole village used to be run by temples like the schools. Later, this system was shut by the British. Even today, no school in India provides religious education. Hindus cannot be taught Dharma without declaring India a Hindu Rashtra. Hence, all institutions must come together and provide education on Dharma which will create an ideal character. At least in primary schools, efforts should be made to impart education on Dharma. A Committee should be set up for this”, appealed H.H. (Dr) Shibnarayan Sen (Deputy Secretary of Shastra Dharma Prachar Sabha in Bengal), while speaking on the ‘Hindu Education system’.

“To learn the importance of Hindu Dharma, every Hindu should be aware of spiritual research. Maharishi Adhyatma Vishwavidyalay research using scientific instruments has shown that objects or places that are externally appealing do not necessarily have to be spiritually pure. In this regard, research experiments were conducted on Heritage Sites known as the 7 wonders of the world. We found that all these sites emit a large amount of negative energy. Most of these sites have tombs. However, when the readings of Shri Tirupati Balaji Temple were taken, only positive energy was found; unfortunately this is not a World Heritage Site. From this, it is clear that World Heritage Sites should be reconsidered from a spiritual perspective”, asserted Mr Sean Clarke, while speaking on ‘Research work of Maharishi Adhyatma Vishwavidyalay that proves the importance of Hindu culture’.

It is important to protect Hindus in the country : Swami Sanyuktanand Maharaj (Bharat Sevashram Sangh)

Even though India is a peace-loving country, Saints should fulfil their duty. Saints are working for world welfare. Let it not be said that since they neglected their duty of protecting Hindus, their numbers reduced. It is important to protect Hindus in the country first. Intellectuals and common people are following ‘Ahimsa Paramo Dharma’ propounded by Gandhi. Due to this, even today Hindus are being persecuted by fanatics. Hindus must unite so that this does not recur. This should be our resolve because nothing can be accomplished without a strong resolve. If you put a weapon in the hands of a sleeping person, it will not work. Therefore, such people should be awakened.