Kyiv (Ukraine) – Russian President Vladimir Putin has declared war on Ukraine. Shortly afterwards, several cities, including the Ukrainian capital Kyiv, were rocked by bombings. Russia invaded Ukraine from all sides. It fired missiles at Ukraine’s infrastructure and destroyed two of its airports. After all these incidents, Ukraine cancelled all flights in the country.

‘The attack was necessary for the security of civilians in eastern Ukraine’, Putin said. He further warned, ‘If other nations try to interfere in Russia’s operations, they will face consequences that they have never experienced before’. According to the Reuters news agency, 40 Ukrainian soldiers and 10 civilians were killed in the Russian attack. Ukraine says its troops have killed 50 pro-Russian separatists. Ukraine claims to have shot down seven Russian planes and one helicopter; however, the claims were rejected by Russia. Ukraine enforced martial law in the country. Ukraine’s Foreign Minister Dmitry Kuleba has called on all major powers, including the United States, to impose tougher sanctions on Russia. Martial law is a law administered by the military rather than the civilian Government. Martial law is declared in an event of an emergency to respond to a crisis or to control the territory occupied. Civil liberties and their fundamental rights are stripped after martial law is declared. As soon as this law is enforced, the basic rights of the citizens like free movement, freedom of speech are deprived for some time.

Will impose sanctions so severe, which Russia has never seen before ! – Britain

‘The invasion of Ukraine by Russian President Vladimir Putin is premeditated and unjust. We will impose sanctions so severe, that Russia has never seen before’, said James Cleverley, Britain’s foreign minister. These sanctions will be approved immediately and will be effective from today. He further said, ‘We support the citizens of Ukraine. We will do our utmost to help Ukraine protect them. The European Union is also taking steps to impose tougher sanctions on Russia. We will freeze Russia’s assets in the European Union and prevent Russian banks from entering European financial markets’.

In the wake of the war, Ukrainian citizens can withdraw only up to 10,000 hryvnias (Ukrainian currency) from banks per day, the Central Bank of Ukraine announced. The panic among the people has led to a flock of people rushing to withdraw money and buy necessities from the market. 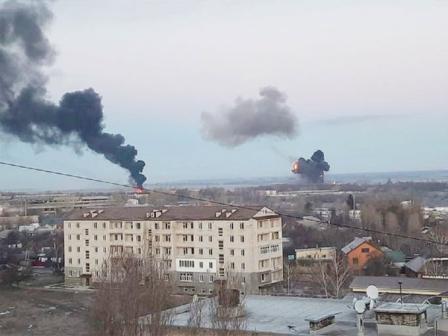 Ukrainian citizens are being encouraged to join the country’s defence forces.

Chinese Foreign Ministry spokeswoman Hua Chunying called on all parties concerned with the situation in Ukraine to exercise restraint. Chunying, however, did not call Russia’s actions ‘aggressive’.

Ukrainian President Volodymyr Zelenskyy announced in a tweet that he was severing all diplomatic ties with Russia. ‘It’s time for all those who have not yet lost their conscience in Russia to take to the streets and protest against Russia’, Zelenskyy said.

Russia should withdraw its troops ! – General Secretary of the United Nations

‘President Putin should withdraw his troops from a humanitarian point of view’, UN Secretary-General Antonio Guterres said while calling for an end to the violence.

Russian forces are said to have taken control of two Ukrainian villages after the start of the war.

Ukrainian President Volodymyr Zelenskyy has told his country’s citizens, ‘Russia has carried out a treacherous attack, just as Nazi Germany did in World War II. Ukraine is defending itself while Russia has chosen the wrong path. In any case, we are not going to hand over our independence to Russia’.

NATO Secretary-General Jens Stoltenberg has warned Russia against the backdrop of Ukraine’s invasion. ‘If Russia continues to invade Ukraine, we have more than 100 fighter jets and more than 120 warships in the Mediterranean Sea to respond to its attacks’, Stoltenberg said.

We will not flee ! – Ukraine

Ukraine’s foreign minister assured citizens via Twitter that even if Putin attacked, no one would flee. The military, the politicians, everyone is working. Ukraine will defend itself.

There will be devastating consequences ! – The US warns Russia

As soon as Russia declared war, US President Joe Biden warned Russia of disastrous consequences. Russia will be responsible for the damage and deaths caused by this attack. The United States has said it will respond to Russia, along with its allies.

Chronology of events in Russia-Ukraine war since morning !

1. At 2:55 a.m. Russian time, Russian President Vladimir Putin announced the launch of a military operation in the eastern Donbas region of Ukraine.

2. Putin said the attack was carried out by Russia in self-defence and called on Ukrainian troops to lay down their arms.

3. Russian troops and tanks are stationed on all sides of Ukraine. One unit of Russian troops has entered from Belarus, north of Ukrainian capital Kyiv, while another unit has entered through Crimea in the south. Crimea was seized by Russia from Ukraine in 2014.

4. Citizens of Ukraine are fearing for their lives. Many have fled their homes. Many citizens of the Ukrainian capital Kyiv have taken refuge in underground metro stations to save their lives after Russia launched a missile attack. Although the attack was expected by Ukrainian citizens, its scope was unexpected.

5. Russia’s invasion has soared oil prices to $100 per barrel for the first time in seven years.

6. The Russian currency (Ruble) has hit an all-time low against the Dollar and Euro.