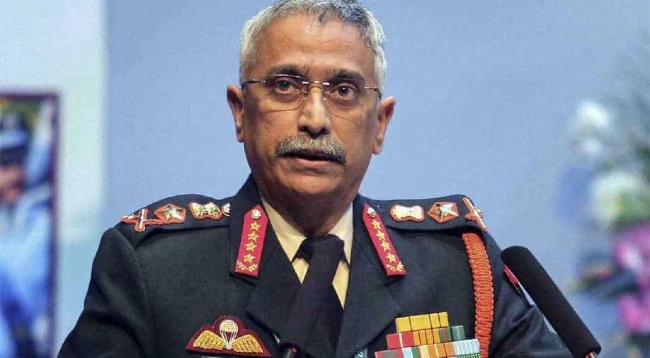 New Delhi – Our neighbouring countries with their nuclear weapons have kept the border dispute unsettled and active, as well as a veiled war, is also being fought from their side. Due to this, we are always alert on the northern border. As a part of this, the restructuring of the Army has started. Adequate coordination was maintained between the three armed forces for its proper utilisation. We are witnessing trailers of future probabilities daily.

Indian Army Chief General Manoj Mukund Naravane said “They are being enacted daily on the frontline, in the networks and cyberspace. They are also being played along our yet unsettled and active borders.” He was speaking in a webinar organised by the Center for Land Warfare Studies (CLAWS). He informed about the threats posed by the neighbours Pakistan and China without mentioning them directly. Our nation is currently facing very difficult, multi-layered and different kinds of security challenges, he said.

We are witnessing trailers of future conflicts: #Armychief #GenMMNaravane on #India‘s security challengeshttps://t.co/BsVWWgrPWt

The threat is distinct by the incidents along the country’s northern border. To safeguard the sovereignty and integrity of our country, it is necessary to prepare the Indian Army with the other two forces with state-of-the-art technology along the border.

Attempts could be made to destabilise the country by involving certain elements in the country, which was proved by the Afghanistan situation. Our adversaries shall continue with their efforts, to achieve their strategic aims, short of conflict, by use of Grey Zone activities, in the political, military and economic domains, and do so in a collusive manner.