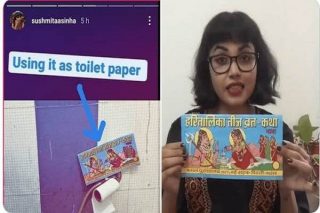 The above picture is not intended to hurt anyone’s religious feelings. This picture is published for information. – Editor

"No Criminal Offense" says SHO in court in case against journalist who had asked people to use Teej Vrat book as toilet paperhttps://t.co/BN7csHGkNC

The incident was reported in Saket District Court, Dehli. In this, the police said, no complaint has been filed against the female journalist for insulting the Hindu deities. ‘We did not find anything inappropriate in this video’.

On the other hand, the Uttar Pradesh police arrested a woman named Heer Khan for making such a video and insulting Hindu deities. (If BJP can take such action in Uttar Pradesh, then why not in Delhi ? Are laws different in Delhi? – Editor, Dainik Sanatan Prabhat)