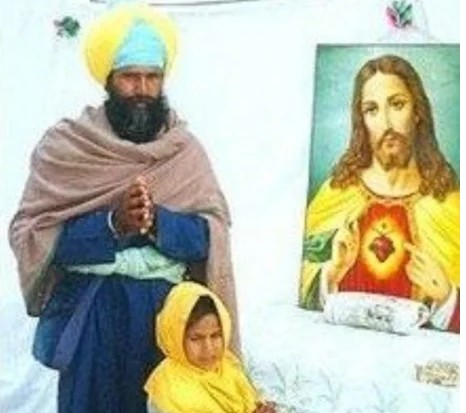 Chandigarh (Punjab) –‘India Today’ has brought to light the fast increasing Christian conversions in Punjab. Over 65,000 missionaries in Punjab have converted lakhs of Sikhs in all the 23 Districts of Punjab; therefore, Akal Takht’s Jathedar Giani Harpreet Singh has demanded from the Aam Aadmi Party Government in the State that it should pass a law against religious conversions. Giani Harpreet Singh said that the Christian missionaries are claiming to have cured people with their so-called miracles. They are, thus, cheating Sikhs and Hindus and converting them. A lot of funds are being received from other countries for this purpose. The Government is busy playing vote bank politics and no action is being taken in this context.

In the past decade, #Punjab has seen a surge in number of Pentecostal Christian pastors. By one estimate, there are now about 65,000 in the State. However, their success has not gone down well with everyone. https://t.co/2cmDhKPeL7#pentecostal #pastor #religion #conversion pic.twitter.com/rzpDEWfTFR

1. Thousands of people go to a Church built in the Khambra Village of Jalandhar District. Pastor Ankur Narula is responsible for this. He converted to Christianity in 2008, after which he took up the responsibility of converting others by setting up ‘Ankur Narula Ministry’. Later, ‘The Church of Signs and Wonders’ was also set up. The Church which had only 3 members in 2008, has more than 3 lakh members today – which means that in the last 14 years, more than 3 lakh Sikhs and Hindus have been converted. This organisation is more active in the regions of Majha, Doaba and the border areas of Firozpur in Malwa besides Fazilka.

2. As per the 2011 census, the population of Christians in Punjab was 3.48 lakh. Today, there are more than 3 lakh members only of the ‘Narula Ministry’. These people, who have fallen prey to the guile of the Christian missionaries, are called ‘Pagadi-wale Christians’.

3. In the Assembly elections which took place in the beginning of this year, there was one large class of people calling themselves ‘Dalit’ and Christians in Punjab. This shows the large net of conversions.

4. As per the statistics of ‘The United Christian Front’, of the 12,000 villages in Punjab, Christians have set up committees in 8,000 villages. There are 600 to 700 Churches in Amritsar and Gurdaspur Districts. 60-70% of the Churches were built in the last 5 years.

5. A similar situation prevailed in the southern States, viz. Tamil Nadu and Telangana in the 1980-90 decade, which shows the path on which Punjab is now moving.

Punjab has become a new centre for Christian conversions

Sohian Kalan village in Amritsar District (The Golden Temple – the centre of Sikh faith is in Amritsar) is the main centre of Christian conversions. There is a Pastor named Gurnam Singh who is responsible for converting many people to Christianity. It is said that he is working in the Police Department.

These people are doctors, engineers, advocates, Police or industrialists. They all are originally Sikhs and are responsible for increasing the number of ‘Pagadiwale Sikhs’. Furthermore, they have many branches and millions of followers on ‘YouTube’.

Pastor Harpreet Deol Jat of ‘Open Door Church’ in Khojewala village of Kapurthala District is a Sikh. Pastor Gurnam Singh Khehra, a surgeon from Harpura village in Batala is also a Jat Sikh.

‘Church of Peace’ at Banur in Patiala has Pastor Kanchan Mittal, who belongs to the ‘Bania’ community; while Chamkaur Sahib’s Pastor Raman Hans is also a Sikh.