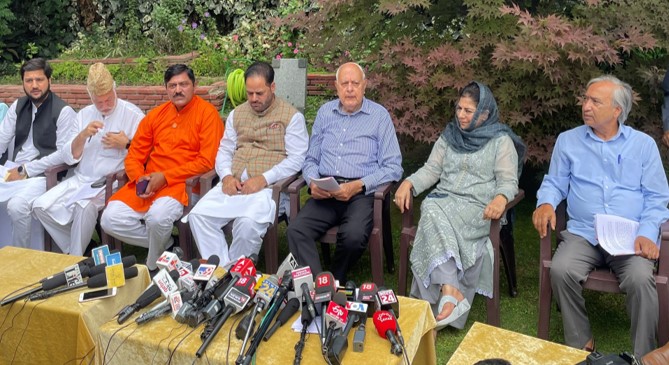 Srinagar – Many political parties have opposed the decision to give the right to vote to citizens from outside of Kashmir. On this background, a meeting was held at the residence of the President of ‘National Conference’ Farooq Abdullah between the Chief of the ‘People’s Democratic Party’ Mehbooba Mufti, the Chairman of the JnK branch of Congress Vikar Rasula, the leader of Marxist party M.Y. Tarigami and the representatives of Shivsena, Awami National Conference, Indian Communist Party, Sanyukt Janata Dal and Akali Dal.

Farooq Abdullah said, “The decision to include the names of the citizens outside of Kashmir in the voter’s list is not acceptable to the political parties in Kashmir. This will destroy the independent identity of Kashmir. Due to this decision, the Vidhan Sabha will go into the hands of outsiders and the people here will be deprived of it. We will definitely protest against this decision legally as well as through all other possible ways.