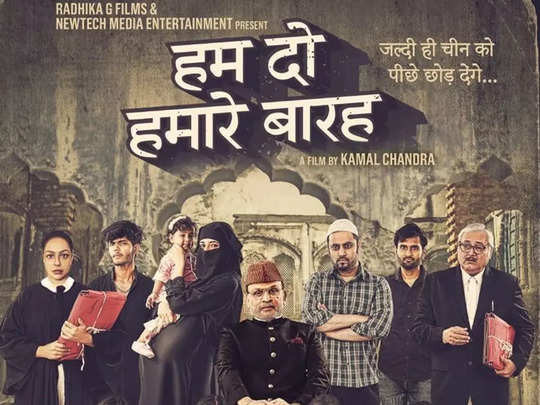 Mumbai – The poster for the upcoming Hindi film Hum Do Hamare Barah has been released. There is a photograph of a Muslim family in it. A total of 12 people have been shown in it. There is a tagline on the poster that says we will overtake China soon. As this film is based on population growth, Muslims have objected to the film.

1. Kamal Chandra, the director of this film, asked the critics to be patient and clarified that the film is not based on any specific community.

2. Rana Ayub tweeted the poster of the film. According to her tweet, how is it possible that the Central Board of Censorship would allow such a film ? Muslim communities are targeted in the film. Using a photo of a Muslim family and titling it Hum Do Hamare Barah is Islamophobia (hatred of Muslims).

How does the censor board allow a film like this that depicts Muslims as the reason for population explosion and extends the relentless attack on the community. The brazen hate and Islamophobia when they use the image of a Muslim family and call it ‘Hum do Hamare Barah’. pic.twitter.com/UFsRqGgF89