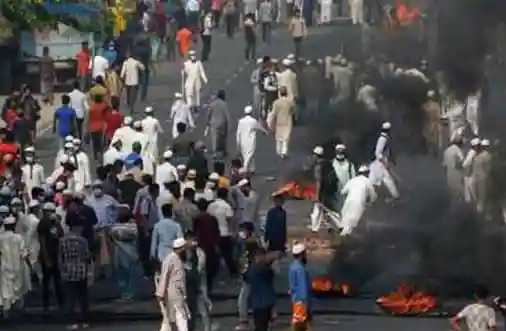 Dhaka (Bangladesh) – A Hindu youth’s house in Dighulia sub-District of Khulna District was set on fire by local Muslim fanatics due to a purportedly disparaging Facebook post against Prophet Mohammad. This incident took place on 16th July and later the fanatics started a spree of attacks against Hindus. Videos of violence have been widely circulated on social media. The fanatics burnt 21 Hindu houses, looted 37 shops, destroyed 9 temples and defaced Idols of Deities. A total of 200 houses of Hindus were attacked in these incidents. Police have arrested Akash Saha and his father Ashok Saha, who allegedly posted offensive content against the Prophet on social media.

“They attacked us because we are Hindus”: Anti-Hindu pogrom in Narail, B’desh https://t.co/MzqgRxbVHK

Police rushed and pacified the violent mob. Police said Akash had posted against the Prophet on 14th July. Further judicial action will be taken after investigation. However, no action has been taken against fanatic Muslims who attacked Hindus.