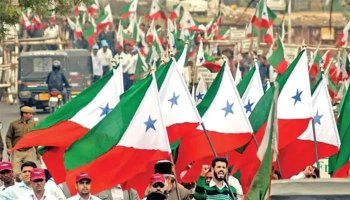 Nizamabad (Telangana) – Police in Nizamabad have arrested three leaders of the jihadi militant group Popular Front of India (PFI). The trio had organised weapons training camps in the District. Under the guise of imparting karate training was training Muslim youth on how to wield weapons and attack people. According to the information given by the Police, these youths were being trained to target Hindus.

1. Large quantities of arms were seized from these three jihadists. These weapons were used in the training camps. The Police said another 30 people have been identified while interrogating the three. The Police will arrest them soon.

2. Commissioner of Police K.R. Nagaraju said that the leaders of the banned outfit SIMI, which was banned a few years back, have become active in the PFI. They organise karate camps at various places but have nothing to do with karate. It invites Muslim youth from the local area and trains them to wield weapons. They teach how to build their dominance by attacking other religions.

3. The PFI has set up a network of such camps. In the camps, they are trained to attack those who make offensive statements about Islam and the Prophet and teach them a lesson. The idea is of 52-year-old Abdul Qadir. He brainwashes young people from Muslim areas and brings them to these camps.