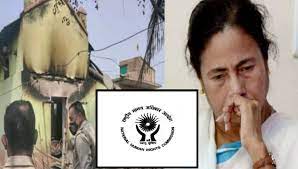 Birbhum (Bengal) – The Central Bureau of Investigation (CBI) filed a charge sheet at Rampurhat Court in Bengal’s Birbhum District. The charge sheet says that Anarul Hossain, the former Rampurhat community Block-1 unit President of Trinamool Congress (TMC), not only ordered the killings at Bogtui village which took place on 21st March 2022 and claimed ten lives but also monitored it while keeping the Police away.

The CBI charge sheet is based on eyewitness accounts, CCTV footage at various places, and the statements of the two out of three women who died of burn injuries at Rampurhat Medical College and Hospital. The charge sheet says that Hossain directed the crowd to attack Sona Sheikh and Fatik Sheikh’s residences, expressly instructing the mob that no one should be spared.

Anarul Hossain was arrested on 24th March 2022. He was earlier accused of murder, arson, rioting with lethal weapons, and criminal conspiracy.

On 21st March, a bombing at the Bogtui crossroads on NH-114A claimed the life of Bhadu Sheikh, the Deputy Chief of the nearby TMC-controlled Barshal Gram Panchayat. According to the charge sheet, Hossain then ordered a counter-assault in response. Four people are accused in the Bhadu Sheikh murder case while 18 others including Anarul Hossain are accused in the violence that erupted after Sheikh’s murder. Ten persons were killed in this counter-attack ordered by the TMC leader, when a dozen houses were burnt down. The miscreants locked the houses from outside before torching them, leaving no room for the occupants to flee.

The residences of Sona Sheikh and Fatik Sheikh were targeted in a section of Bogtui village, just 150 metres from Rampurhat town, and fuel was transported from a nearby store in an e-rickshaw whose driver the CBI had detained. Unmehani Khatun, an 8-year-old child, was one of the six who were burnt alive that night.

Hossain is accused of instructing local Police not to rush to Bogtui. The charge sheet cites witnesses who informed CBI that Hossain gave the perpetrators assurances that no Policeman would approach the area for at least an hour in accordance with his orders. The Bogtui village is less than one kilometre from the Rampurhat Police station but the Police took more than one hour to reach the spot.
Several witnesses informed the CBI that when they phoned Hossain for assistance, he told them they would have to bear the repercussions of the attack on a TMC leader. According to the charge sheet, Hossain deleted the call logs from his phone in order to destroy evidence.
Samik Bhattacharya (Bengal Bharatiya Janata Party’s Spokesperson) said, “Anarul Hossain is too small a fry to plan and commit such a massacre on his own. It is obvious that he was carrying out the orders given by someone senior to him in the TMC hierarchy. Are we to believe that top district Police officers did not rush to Bogtui just because Hossain asked them not to ?”

A newspaper reported that Hossain was associated with the Congress, before defecting to the TMC in 1998 and went on to serve as the party’s Block President for more than a decade. He controls the Municipal Corporation and the sand mining business in the Rampurhat area.
Another newspaper reported that Hossain grew up in poverty and worked as a mason; however, his fortunes changed after 2011 and today he lives in a bungalow in Sandhipur village. He is also the owner of several houses and cars.