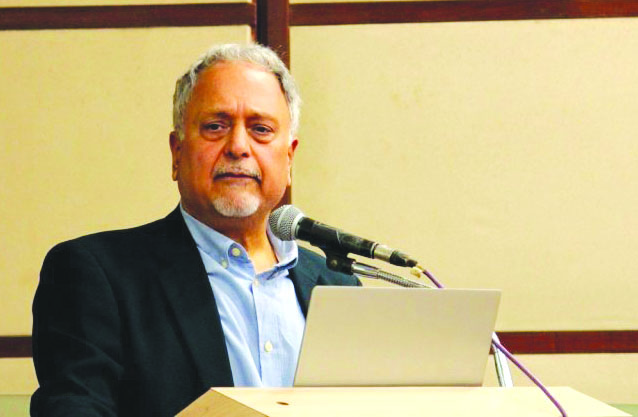 Mumbai – “Now India should change its nuclear policy of ‘No first use’, and if necessary for the country’s good, be prepared to initiate attacks with atomic weapons”, said Mr Bharat Karnad (Security and Geopolitics expert) at the ‘Asiatic Societies’ lecture on ‘India’s Geopolitics : What should be done to strengthen it ?’ Mr Bharat Karnad is Professor Emeritus,of National Securities Studies in the Centre for Policy Research at New Delhi. He reminded the audience of Dr Homi Bhabha’s advice – ‘Only a chain of nuclear weapon states can maintain stability in Asia’. Dr Bhabha (known as ‘Father of the Indian nuclear programme’) had said this to Prime Minister Jawaharlal Nehru.

“We face the challenge of China’s expansionism. China’s policy is to continuously pose a danger to India on Doklam, Ladakh and Arunachal Pradesh borders. China wants to bring India to its knees. India has tried to chart out a policy with support from the US to handle China’s expansionism; but the US does not help until something is to its own advantage. Ukraine is its most recent example. India should chart a policy for addressing China’s geopolitical challenge, knowing that China will never give equal status and respect to India.

Having a nuclear weapons equipped friendly countries and Indian security bases encircling China will create fear that there can be retaliation to its aggression; this will keep China’s expansionistic bullying under control.

India should use its Geopolitical stature, monetary, technological strength and atomic capability against China. India should increase co-operation with South Korea and Japan. Open military bases in countries such as Indonesia and other countries along the sea.

Soon, in the coming years there will be signs that India is a world economic leader after the US and China”.