Kyiv (Ukraine) – The war between Ukraine and Russia has taken a horrific form on the sixth day. Russia launched a major offensive on the Ukrainian military base in Okhtyrka. More than 70 Ukrainian soldiers were killed. The city is located between Kharkiv and Kyiv. Russia’s military is rapidly advancing on Kyiv, the capital of Ukraine. It has stepped up its offensive. Russia’s military contingent is 64 km long, as seen in satellite imagery. This is Russia’s largest military convoy sent to Ukraine so far.

More Than 70 Ukrainian Soldiers Killed In Russian Attack On Base Near Kharkiv https://t.co/NRNvEXA1l3

Russia has bombed the main Government building in Kharkiv, the second most important city after the capital Kyiv.

What is a ‘vacuum bomb’? pic.twitter.com/prvL4xJTvn

Ukraine has claimed that Russia attacked it on the night of 28th March with a ‘vacuum (thermobaric) bomb’. It was not immediately clear how many people were killed or injured in the attack. The use of these bombs is prohibited under the Geneva Conventions. This bomb is also known as the ‘Father of All Bombs’. Thermobaric weapons do not use conventional ammunition. They are filled with high-pressure explosives. Their powerful explosion absorbs oxygen from the surrounding atmosphere. The thermobaric bomb is considered one of the most deadly nuclear weapons in the world. The bomb was invented by Russia. It is also known as the ‘Aerosol Bomb’ and is a very dangerous bomb. This bomb, which weighs 7,100 kg, destroys buildings and kills people. Russia had earlier used this ‘vacuum bomb’ on Syria in 2016. This bomb emits ‘ultrasonic shockwaves’ and causes more destruction after blasts.

The United States had developed the ‘Mother of All Bombs’ in 2003, called the GBU-43/B. It has a blast yield of 11 tons of TNT, while the Russian vacuum bomb has a blast yield of 44 tons of TNT. Russia created the ‘Father of All Bombs’ in response to the US-made bomb. This bomb can destroy the area within a radius of 300 meters. This bomb is dropped by fighter jets and explodes in the air, absorbing oxygen from the air. Extreme heat builds up, causing large explosions. This causes the blast wave to last longer than a normal blast. The bomb has the ability to convert the human body into vapours. It produces the same effect as a small nuclear weapon. However, these powerful bombs pose no threat to the environment like nuclear weapons.

Russian Ballistic Missile on Chuguev Air Base in #Kharkiv, Ukraine. As per reports it’s a Thermobaric Bomb also known as the Father of All Bomb (FOAB). 🇺🇦 🚨
.
.#RussiaUkraineWar #Chuguev #Ukraine #UkraineWar #Warzone pic.twitter.com/VSDrNJbIu4

Ukraine’s Ambassador to the United States and human rights groups have accused Russia of attacking Ukraine with ‘vacuum bombs’ and ‘cluster bombs’. Human rights groups Amnesty International and Human Rights Watch have condemned Russia’s actions and accused its military of using the prohibited cluster ammunition on a large scale. Russia dropped the bomb on a preschool in north-eastern Ukraine, where civilians had gathered for shelter.

The US has kept its nuclear weapons on alert too ! 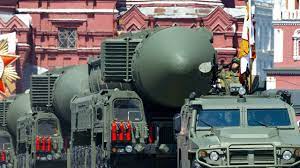