Insecure Hindus in the regime of the so-called secular ruling Awami League ! 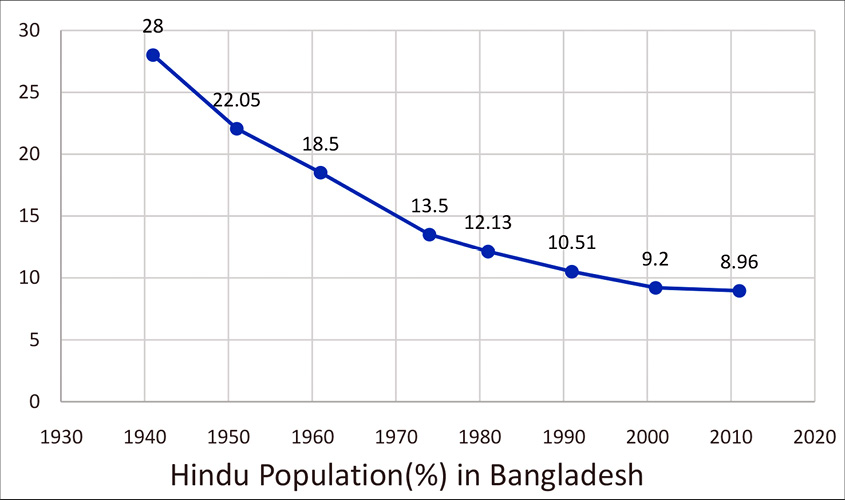 New Delhi – The population of Hindus in Bangladesh has declined by 5% in the last 4 decades and it is only 8.5% now. Bangladeshi Hindus are running away from that country and coming to India in large numbers. Prime Minister Sheikh Hasina has been portraying herself as a secular leader; promising protection to Hindus, but she has not been able to stop the present ongoing attacks on Hindus in her country. The Hindu voter has been traditionally a supporter of the ruling Awami League in Bangladesh. This party has been ruling the country since 2009; still, attacks on Hindus are constantly going on.

Diminishing percentage of Hindus in Bangladesh and Pakistan and increasing Islamic population in India is the reason of all kind of unrest in Indian peninsula!#HindusUnderAttack #Hindus_Attacked_In_Bangladesh pic.twitter.com/c64HResU9t

Plot to post anti-Islam matter on social media and attack Hindus under this pretext by blaming Hindus for it !

Bangladesh’s ‘Ganasamiti Andolan’s Junaid Saki said that the ruling Awami League gives false promises to protect the minority and amongst them, especially the Hindu population, but that is not the scenario in the country. There seems to be a specific method followed to attack Hindus, in which a sensational post or a video is posted which goes viral on social media; then it is claimed to be against Islam. As a result, the extremists’ factions give orders to attack Hindus; then Hindus are attacked systematically. Even the minority Hindu community has also realized this method. Hindus are disregarded at the political level.

By 2050 there will be no Hindus left in Bangladesh.

BUT DO WE CARE ? pic.twitter.com/sodsBSUD2d

No action is taken even after registering a crime !

Rana Dasgupta of a Bangladeshi minority organisation called ‘Bangladesh Hindu, Buddhists, Christian Unity Council’ stated that the population of Hindus is going down with their exodus. The Government used to only order to register crimes. Now under the regime of the Awami League, cases are registered against the guilty, but no action is taken against them.