Sanatan Dharma looks upon jewellery not just as fashion, but as a spiritual code of conduct or ‘Achar’. Achardharma (Code of righteous conduct), a unique aspect of Sanatan Dharma, is the spiritualisation of every aspect of our daily life. Spiritualisation means making all aspects of our life sattvik (Spiritually pure) and enriched with Chaitanya (Divine consciousness).

Women with a pierced left nostril is a common sight in India, mostly seen in South India. However, piercing the nose at various points other than the left nostril is becoming increasingly popular. These are mostly done as a fashion statement or a gesture of rebellion. Little known to us, each of these piercings have an effect on us at the subtle level (that which is beyond the comprehension of the 5 senses, mind and intellect).

Here, we will explain what actually happens at the subtle level when the nose is pierced at each point and a nose jewel is worn at that place. This will help us take an informed decision about where best to pierce our nose and where to avoid. Let us begin with the function of the nose from the perspective of subtle energy.

1. Role of breathing in awakening the Kundalini channels

The Kundalini system is a subtle energy system in the body that provides subtle energy to all our physical, mental and spiritual actions. It functions through its 72,000 channels known as nadis, along with its 7 centers known as chakras. The Moon channel (Ida nadi), the Sun channel (Pingala nadi) and the Central channel (Sushumna nadi) are the 3 main nadis. The breath inhaled from the right nostril awakens the Pingala nadi. This increases the Sattva predominance (Sattvikata) in the body. In contrast, the breath from the left nostril awakens the Ida nadi. This increases the Raja-Tama components in the body and the excretory gases are expelled.

2. Subtle effect of piercing the nostrils

In Pranayam, a finger is placed on the left nostril, thus closing it and the opposite nadi, that is, Pingala is activated. Placing a finger on the right nostril activates the Ida. Similarly, when women wear sattvik jewellery by piercing their left or right nostril, their Pingala and Ida are respectively activated at the optimum level. However, the nadi on the side of the piercing also continues to function to a lesser extent than the nadi on the opposite side. 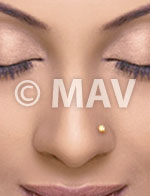 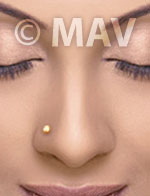 2B. Subtle effect of piercing the right nostril : Piercing the nose on the right side activates the Ida nadi. This leads to increase in the proportion of Shakti (Divine Energy) in the woman. Excess of Shakti in the body can lead to physical and mental ailments such as menstrual irregularities, mental disturbances.

3. Subtle effect of piercing the nose at
points other than the regular nostril position 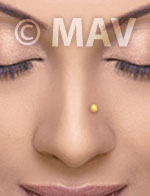 3A. High nostril piercing : Here the nose is pierced slightly higher than the regular piercing point. Upon piercing at this point, instead of being activated at the optimum level, the opposite nadi is activated in a greater proportion. This leads to increase in Shakti levels in the body. This can lead to leucorrhea too (White discharge from vagina), menstrual irregularities, etc. in the woman. Similarly, by wearing jewellery at this higher point, the Tej-tattva (Absolute Cosmic Fire Principle) imbibed from the jewellery can create a subtle barrier of Tej-tattva in that part of the nostril (right or left). Once such a subtle barrier is formed, the flow of Pranashakti (Vital energy) to the associated nadi is hampered. Due to this, obstacles are created in the Pranashakti flow imbibed through that nostril and provided to the respective nadi. Thus, as the flow of Pranashakti reduces, various obstacles are created in parts associated with that nadi. This can result in various disorders such as indigestion, urinary problems, increased blood pressure etc. 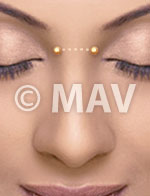 3B. Bridge piercing : Here, the nose is pierced at the topmost part of the nose near the eyes on both sides and jewellery connecting both the parts is worn. By piercing the nose in this way, the Tej-tattva imbibed from the jewellery creates a subtle barrier in the area where the jewellery is worn. Pranashakti reaches the Kundalini chakras through our breath. The subtle barrier creates an obstacle in the Pranashakti going to the Ajna-chakra through the nostrils. As a result, the supply of Pranashakti to the system of flow of Pranashakti becomes intermittent and reduces. Due to this, a covering of dark distressing energy is created on the Ajna-chakra. This results in various problems related to the head and eyes such as mental disturbances, depression, insomnia, high blood pressure etc. The covering on the Ajna-chakra creates obstacles in the flow of Pranashakti between the Ajna-chakra and the Mooladhar-chakra. The covering also helps subtle negative energies gain control on the woman. 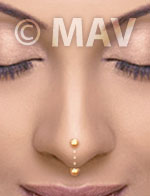 3C. Rhino piercing : Here, the nose is pierced at its tip and the part below it. Upon wearing jewellery at Rhino piercing, there is pressure on the nostrils and Shakti is imbibed in higher proportion. It may be difficult for the woman to tolerate this higher proportion of Shakti. This leads to increase in the Pitta (Bile) and Vata (Air) dosha (Humour)as per Ayurveda. The woman can suffer from infrequent menstrual cycles, higher menstrual blood flow, depression, etc. The Tej-tattva attracted from the atmosphere by the jewellery worn at the Rhino piercing directly impacts the Kundalini chakras. If the spiritual level of the woman is not high, the chakras start moving anti-clockwise. As a result, the subtle protective sheath of Tej-tattva does not last. Thus, it becomes easy for the subtle negative energies to attack the Kundalini chakras and gain control on the woman. 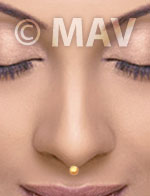 3D. Septril piercing : Here, the nose is pierced at the septum. Due to this, the Shakti imbibed narrows the voids on both sides. As a result, the Pranashakti imbibed through the nostril reduces by 10 percent. This leads to various ailments such as fatigue, breathlessness, asthma. The pressure on the septum affects the Kundalini chakras and weakens them and leads to various ailments. Subtle negative energies can easily attack the Kundalini chakras and create a distressing energy covering on them.

3E. Nasallang piercing : In this method, the nose is pierced at the regular piercing points of both nostrils and a jewellery connecting the two 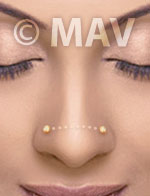 3F. Septum piercing : Here the nose is pierced at the septum at the base of the nose. By wearing a nose jewel at this point, the width of the 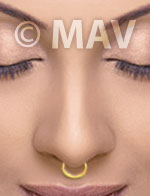 nostrils on both sides reduces. Hence, the supply of Pranashakti through breathing reduces. In the case of women who are above the spiritual level (Note) of 61 percent, their breathing slows due to their high sattvikata. Hence, if they wear jewellery at this point, their Sushumna nadi can be activated. Thus, they may benefit from this piercing.

When women at a lesser spiritual level wear jewellery at this point, since the width of the nostril reduces, the Pranashakti imbibed through breathing reduces by 10 percent. Various physical ailments can arise due to this. Due to the nose jewel worn at this piercing, since the Pingala and Ida nadis are mildly activated simultaneously, Shakti flows in the body in a greater proportion. This Shakti flows from one to the other nadi as per the status of activation of the respective nadi. As a result, it is at times more on one side and less on the other. If the flow is more to the Pingala, the woman can experience sudden burst of enthusiasm. If it is towards the Ida, she can experience sudden bout of lethargy.

In this method of piercing, if the proportion of Shakti is in excess, the woman can experience menstrual problems. Since the nose is pierced at the root, her Kundalini chakras get activated, and positive energy starts flowing into the atmosphere. To prevent this flow, negative energies can attack the woman to place obstacles in it. This is why, it is prudent to avoid piercing the nose at this point, except in the case of the spiritually evolved women. 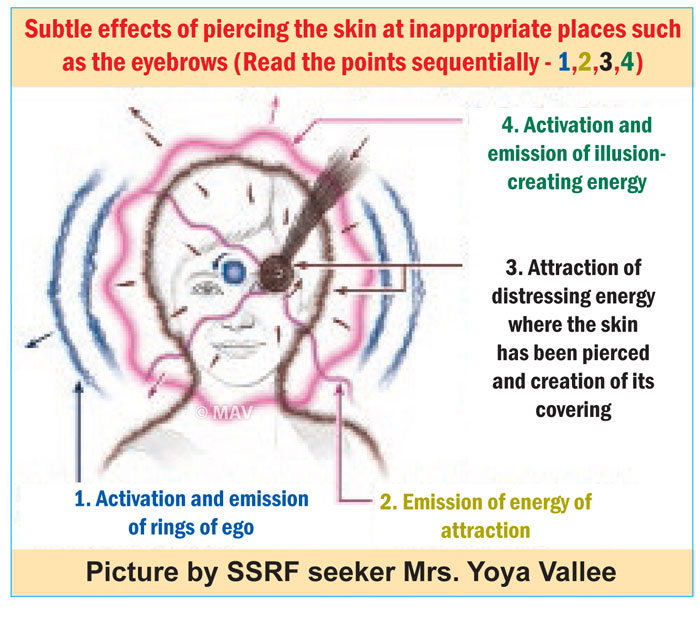 4. Subtle picture of inappropriate piercing
The true measure and analysis of what happens in the subtle dimension can only be through the medium of the sixth sense. At the Maharshi Adhyatma Vishwavidyalay (MAV), we have seekers in our spiritual research team who can actually perceive subtle vibrations emitted by an object or individual. After studying these vibrations they sketch them on paper. We call these sketches ‘Subtle pictures’. They serve as spiritual X-rays and provide clarity about the true nature of the object or individual. The readings are then confirmed or corrected by Paratpar Guru (Dr.) Athavale, to get the accurate values.

This subtle picture shows that distressing energy is attracted by piercing the skin at inappropriate places.

Moreover, it forms a covering on the entire body. This distressing energy negatively impacts us at the physical, mental and spiritual levels.