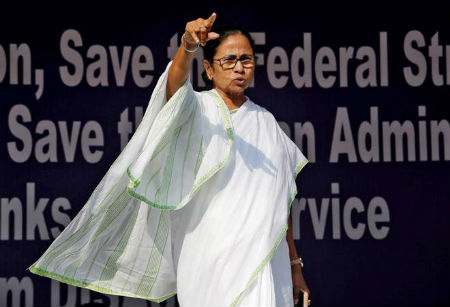 Kolkata – ‘If the TMC returns to power, we will provide lifetime free ration to the poor.’ Bengal Chief Minister Mamata Banerjee lured the public with ridiculous promises in an online meeting. The State Assembly elections are due in 2021. Because of forthcoming elections, she was addressing the public.

West Bengal CM Mamata Banerjee announced that if people keep TMC in power in the upcoming Assembly polls in 2021 then she will give free ration and free healthcare for lifetime to the people.https://t.co/OSFFBnW6iH

She continued, ‘We were supplying free ration before the lockdown. Ten crore people are getting free ration. We will avenge the treatment Delhi meted out to us. (If the persons practising the politics of extreme hatred return to power, how they will treat the public is not very hard to imagine. – Editor) We will not allow any outsider to rule Bengal. We know how to rise again. Do not underestimate the TMC. We did not forget the CAA and NPR. The States have the power to decide the citizenship of people. (Mamata Government treats people from the other Indian States as foreigners, but intruders from Bangladesh as dear ones; this is anti-national ideology. It is a misfortune that such leaders are born in India. – Editor.) The Central Government has no right to pass an Act and harass people. These people are liars and instigate violence among communities. (Why Mamata Banerjee does not name the people behind the bomb blasts, riots, and mass killings of Hindus in Bengal ? – Editor.)