Police refused to register the complaint in the beginning; but later arrested 2 accused giving in to the agitation by Hindus gathered there 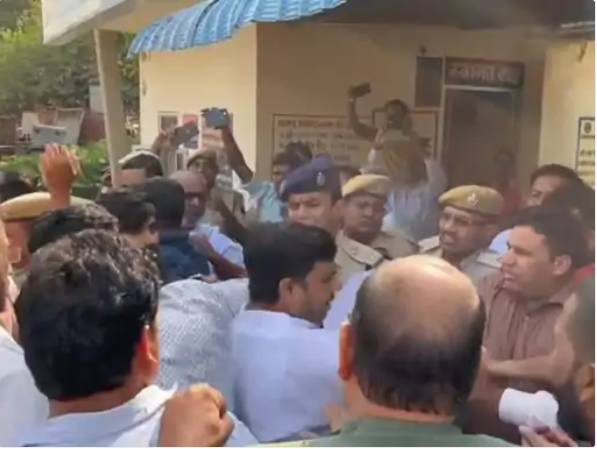 Bhivadi (Rajasthan) – Mubarik, Mufid, Talim and Jom Khan attacked the Shiva temple when the Prasad was being distributed to devotees in the temple. (The advocates of Dalit-Muslims bhai bhai will not say a word about this. – Editor). The four Muslims vandalised the temple and threw away the Prasad. Some devotees tried to stop this attack, but they were beaten up badly by the attackers. This incident happened on 26th October. Dalits tried to register a complaint at the Police station but the Police refused to register the complaint. Therefore, the dalits started agitation outside the Police station. Thereafter, the Police arrested 2 accused while taking action against the attackers.

When dalits were engaged in the agitation, the Congress MLA Sandeep Yadav reached there. Seeing him there, BJP workers present alleged that he had come to save the accused. This generated conflict between Yadav and BJP supporters and there was fight between the 2 groups. The Police intervened and stopped the fight.