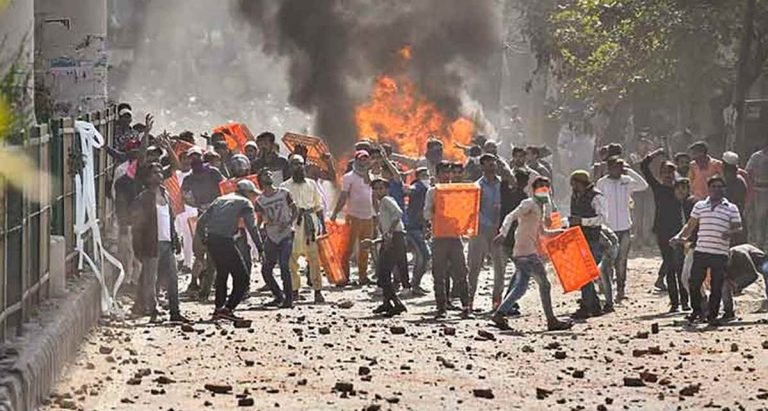 1.A religious fanatic rioter involved in Jahangirpura riots, moves Delhi High Court to avoid investigation and seek non-harassment order against himself and his family

On the day of Hanuman Jayanti (on 16th April 2022), religious fanatics attacked a procession in Jahangirpura area of Delhi with bricks, stones and glass. This resulted in a lot of damage. Sheikh Ishrafil, who incited more than 500 fanatics and assaulted the procession, moved the Delhi High Court. He first requested that the Police should not persecute the petitioner (Ishrafil) and his family while investigating the crime registered against him. ‘The Police have no right to instill fear in the minds of innocent citizens because this violates their fundamental rights’, he claimed. In short, making such a plea means obstructing the Police investigation in some way.

In this case, the Government and the Police placed detailed information before the Court. They said that the fanatic petitioner instigated a community of 500 people against Hindus after approaching the mosque while the Hanuman Jayanti procession was passing through the Jahangirpura area and tried to disrupt law and order by taking the law into their hands. All of them attacked the Hindus and the Police with stones, glass bottles, bricks, swords, guns, etc., and also set fire to many places. The Police had to fire tear gas and open firing 52 times to bring the fanatics under control. This is a big conspiracy.

While investigating the riots, the Police found stones, glass bottles and other materials stored on the roofs of the houses of the fanatic rioters. Such materials were also found in the petitioner’s house. The fanatic has tried to avoid arrest for many days. In connection with the riots, the Police have charged the fanatics under ‘rioting, obstructing the work of Government employees, causing grievous harm, conspiracy, setting fire to houses, damaging public places, creating enmity between two communities, inciting a group to commit riot’. These offenses were also registered under the Arms Act.

3. In the Court, religious fanatics tried to claim that the Police investigation was fake

In his petition, the religious fanatic stated that his father had died on 14th April and he had gone to the burial ground with 500 relatives, friends and acquaintances to perform the last rites, that the Police has arrested his brother for no reason when he had no hand in the riots, and even now, the Police are harassing other people. The Court reviewed this with the information given by the Police. The religious fanatics used lethal weapons. The Police had to use tear gas and open firing 52 times to control the frenzied crowd of fanatics. The accused is indirectly seeking bail by filing a petition in the High Court to avoid arrest. The High Court opined that he should not be granted bail and should not interfere as the case is under investigation. Taking into account the previous judgments of the Supreme Court, the High Court said that the Police and the judiciary play a complementary role in protecting the fundamental rights of citizens and law and order. ‘Investigation is an important right of the Police. Therefore, to maintain law and order, it is necessary to allow them to investigate’, the Court observed.

Keeping this fact in mind, the Court rejected the petition of the accused religious fanatic. It mentioned not once, but many times, that ‘the (fanatic) petitioner had attacked Hindus with the help of his own community of 500 people. Therefore, the Court does not want to interfere in the investigation of the Police at this point in time.

The purpose of filing the petition was only to disrupt and stop the investigation. It will be incorrect to not allow the Police to investigate in the name of fundamental rights. It is not right for the accused to first participate in riots and then say that fundamental rights are being violated. The Police should follow their duties and maintain law and order. “We are not considering the petition on this ground”, said the Court and dismissed the petition filed by the religious fanatic against the Delhi Police.