It is only due to biased coaching in anti-Hindu Institutes that the Indian Administrative Services are full of anti-Hindus ! 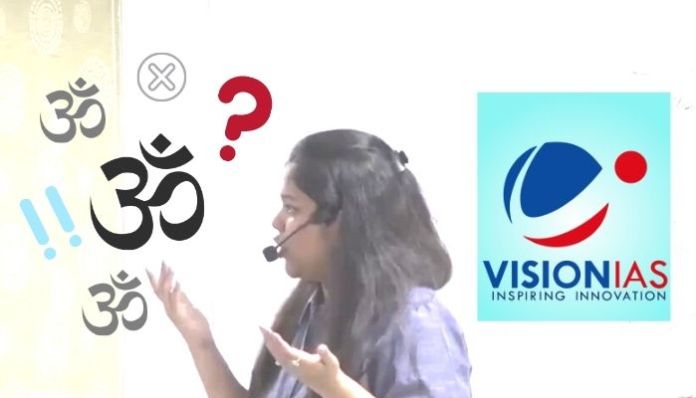 New Delhi – On 28th February, a controversy broke out when a video of a faculty from UPSC training academy – Vision IAS made rounds on social media wherein a faculty member was seen calling the ‘Bhakti Movement’ a cult inspired by the rise of Islam in India. It is learnt that during her lectures, blatant Islamic propaganda and political brainwashing is often being peddled. When rightfully called upon by netizens over the communization and politicization of studies in the coaching centre, the Institute issued an apology although siding with the concerned lecturer as their ‘esteemed faculty’.

Blame it on her ignorance or accuse her of peddling lies in the name of education, the subtle brainwashing exercised by Vision IAS faculty Smriti Shah stooped to the lowest levels of Hinduphobia. Not only is this IAS training academy accused of furthering political propaganda through its lectures, but the uncovering of layers has also exposed the rot of Hinduphobia that runs deep to the core of IAS education in this country.

Political brainwashing and lies: What was said by Smriti Shah and how Vision IAS is spreading anti-Hindu propaganda in the guise of UPSC coachinghttps://t.co/N13xgbWL5K

One fine day when Smriti Shah asked her students about the origins of the Bhakti Movement, she prompted them saying, “It was nothing but Islam arriving in India in the 7th Century. It was very liberal and talked about equality. There was no caste system either”. She elaborated how the ‘Bhakti Cult’ was started as a reaction to the rise of ‘Liberal Islam’ accommodating its ideas of voicing against the discrimination and universal brotherhood. She did not mention the cruel episodes of destruction and pillage of Hindu structures by Islamic Invaders.