Idol handed over to India on the occasion of Makar Sankranti 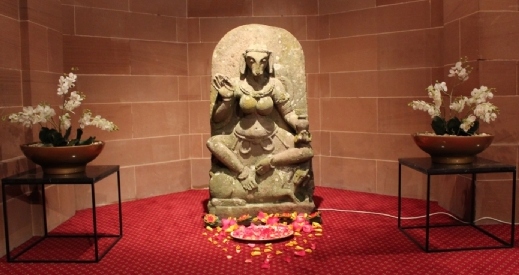 London (England) – The Idol of the goddess, which was stolen from a temple in Bundelkhand, Uttar Pradesh, about 40 years ago, has been found in a garden in England. This Idol dates back to the 10th century and was handed over to India on the occasion of Makar Sankranti. The Idol will now be handed over to the Indian Archaeological Survey at New Delhi.

This Idol is one of the Idols of the ‘Yogini’ group established in Lokhari temple in Banda District of Bundelkhand. Yogini is a group of powerful goddesses associated with Tantrik worship. They are worshipped as a group. The Idol was reported to the High Commissioner in October 2021. The Idol was handed over to Gaitri Issar Kumar, Indian High Commissioner to England.

An ancient Indian idol dating back to the 10th century, which was illegally removed from a village temple in Uttar Pradesh over 40 years ago and discovered in a garden in England, was restored to India on the occasion of #MakarSankranti on Friday. pic.twitter.com/RFJIMtgMIv

Gaitri Kumar had also taken another Idol of Yogini back to India during her tenure in Paris. That Idol was also stolen from the same Lokhari temple. The Idol was placed in 2013 at the National Museum, Delhi.