Opposed by the Saints and BJP 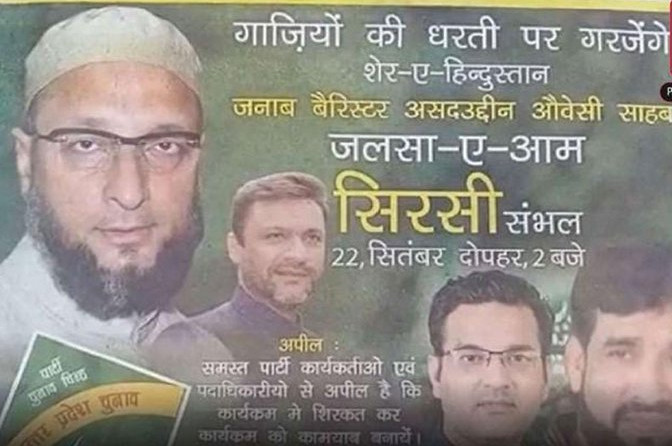 Lucknow (UP) – In Sambhal, Uttar Pradesh, a controversy arose over the posters put up during the visit of AIMIM President and MP Asaduddin Owaisi. The poster read, ‘Welcome to the land of the Ghazis (Islamic religious warriors).’ These posters were put up by AIMIM leader Musheer Khan Tareen. The BJP and the Saints of the State have opposed it.

Asaduddin Owaisi and his followers are crystal-clear about their end goal, and who their role-models are. They adore Ghazis (Islamic fighters & conquerors), but expect Hindus to follow Gandhi and Nehru. Just another form of taqiyya. https://t.co/tNRzJVvAsY

Ghazi means religious warrior in Islam. Those who struggled to establish their religion and those who converted people of other religions are warriors. In Sambhal, there were two wars between Prithviraj Chauhan and Mohammad Ghazni’s nephew, Syed Salar Masood Ghazni. In the first war, Prithviraj Chauhan was victorious, and in the second war, he was defeated. Since then it has been ruled by the Mughals.

Lord Kalki’s incarnation will be in Sambhal

It is said in the Puran that the 10th incarnation of Shri Vishnu i.e. Kalki Avatar will be born in Sambhal. He will be from a Brahmin family. This is also mentioned in the book ‘Dasam’ of the 10th Guru of the Sikhs, Shri Guru Gobind Singh.