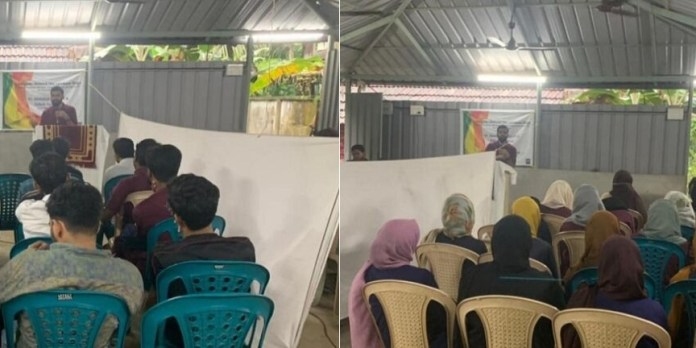 Thrissur  (Kerala) –  Taking a cue from the Taliban administration in Afghanistan, the meeting in the Government Medical College, Thrissur an Islamist  Preacher, Abdulla Basil, under the banner of Wisdom, an Islamist outfit organised a meeting in which male and female students sat separately with a curtain between them. There was criticism on social media about this. Abdullah, the Islamic preacher, said, he feels pity for those who can’t digest the standpoint of religion towards gender discourse, which is quite different from that of liberals.

#Kerala: Taking a cue from the #Taliban, an Islamist group organised a meeting in the Govt medical college, #Thrissur in which male and female students sat separately from male students with a curtain between them. #Exclusivehttps://t.co/ITPrPNmnFy

In September last year, media across the world published news from Taliban-ruled Afghanistan where the female students were separated from the males with the use of curtains or boards that divide the classroom. The Taliban administration had received flak from social media from various quarters as the decision amounts to gender-based discrimination.