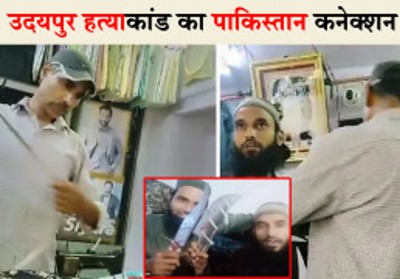 New Delhi – It has been found that the Pakistani terrorist organisation of Sunni Muslims ‘Dawat-e-Islami’ is involved in the killing of Kanhaiyalal. Riyaz Ansari and Mohammad Gaus arrested in the case are connected to this organisation. This organisation has been active in more than 100 countries in the world. This organisation also conducts online classes for the propagation of Islam and is accused of carrying out conversions in India.

Investigation into the Udaipur murder has revealed links of the two murderers with Karachi-based Sunni Islamist organization Dawat-e-Islami, which has links with Barelvi pan-Islamic Tehreek-e-Labbaik extremist organization

1. ‘Dawat-e-Islami’ claims to be an apolitical Islamic organisation; founded by Maulana Muhammad Ilyas Attar Qadri in 1981 in Karachi, Pakistan. It is also active in India for the last 40 years. It is working for the propagation of Shariat law and its knowledge.

2. This organisation has its own website to impart training in Islam. There are 32 curricula available on the website for the propagation of Islam, with different types of curricula for women and men.

There is a course on the website of ‘Dawat-e-Islami’ called New Muslim course. It is taught online and the main purpose of the course is to impart training on Islam to the newly converted Muslims. A special kind of training is also imparted to make these converted Muslims into jihadists.

Jihadi Mohammad Gaus had stayed in Pakistan for 45 days !

Riyaz Ansari and Mohammad Gaus, involved in the killing of Kanhaiyalal, are connected to this organisation. They completed the online course, and Mohammad Gaus stayed in Pakistan for 45 days. Both of them acted as sleeper cells for terrorists (providing local aid to terrorists).

NIA registered a case under the anti-terror Unlawful Activities (Prevention) Act in connection with the “heinous murder” of a tailor in Rajasthan’s #Udaipur by two people who, the agency said, wanted to “strike terror among the masses across the country”.https://t.co/GYa2ebS5JB

The investigations have been handed over to NIA as it has been found to be a part of an international conspiracy.