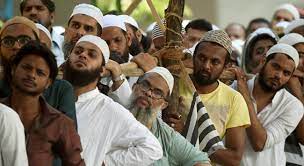 Guwahati (Assam) – The BJP Government in Assam has proposed unique IDs for Muslims, which the Muslim political parties have opposed.  CM Hemant Biswa Sarma had founded a committee after visiting regional Muslims in the different parts of the State. According to the CM, the committee was founded to maintain the uniqueness of the indigenous Assamese Muslims. This committee recommended the issuance of certificates or identity cards with a census for identification.

The proposed draft by the Government does not include Muslims from Bangladesh who speak the Bangla language; however, Muslims who claim to have roots in Assam are segregated into four groups. The four groups are – Goria, Moria, Deshi, and Julha. These four groups will be issued unique identifications.

Aminul Islam of All India United Democratic Front has opposed this draft by saying that the State Government is trying to divide the Muslim community. There is no basis to decide which one (Assamese or Bengali) is the indigenous Muslim community. In addition, several families have married each other. Therefore, identification is not possible.