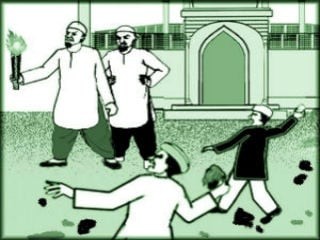 Nevasa (District Nagar) – A grand procession of Shriram was taken out in Nevasa City on the occasion of Shriram Navami on 10th April. At that time, 20 to 25 religious fanatics gathered and hurled stones at the procession, chanting ‘Pakistan Zindabad’ and ‘Allahu Akbar’. After that, the Hindus revolted strongly. Jihadists chanting “Pakistan Zindabad” were beaten up. The Police registered a case and arrested Rehan Shaikh and Fazal Shaikh along with 6 religious fanatics. The Nevasa Court sentenced them to 2 days of Police custody. Police were not present when large crowds gathered and the law and order situation became critical. While the procession was going on, only 1 Police officer and 1 Police jawan were helping the procession. Had there been more Police support, the procession would have passed peacefully, said a resident. (Wasn’t the Police lethargic ? – Editor)