Moscow (Russia) – Russia has recognised the two Ukrainian provinces of Donetsk and Luhansk as ‘independent nations’. The announcement was made by Russian President Vladimir Putin while addressing the nation. Russia’s shocking decision has further fuelled the Russia-Ukraine conflict, which could lead to the outbreak of World War III. It has caused a stir around the world. 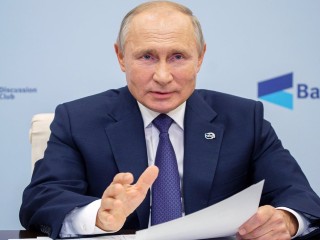 An executive order on recognition of the Donetsk and Lugansk People’s Republics has been signed https://t.co/CuzfdvHXB1

Separatist leaders had urged Russia to declare an ‘independent nation’

Separatist leaders had urged Putin to recognise them as an independent country and provide military assistance to protect against Ukrainian military aggression. Accordingly, Putin signed an agreement recognising Donetsk and Luhansk as independent nations. Russia has begun deploying troops in these two provinces.

This decision should have been made long ago ! – Russia

Addressing the nation, Putin said, ‘Ukraine is an integral part of Russia’s history. Eastern Ukraine is an ancient Russian land. This decision regarding the independence and sovereignty of the citizens of Donetsk and Luhansk had to be taken long ago. The Russian people will welcome my decision’.

We have the full support of the West ! – Ukraine

Responding to Putin’s decision, Ukrainian President Volodymyr Zelensky said, ‘We have no fear. We have the full support of Western countries’.

US, European Union, and NATO condemn the move !

Russia’s decision has been condemned by the United States and other countries, as well as the European Union and NATO (the North Atlantic Treaty Organisation). Russia’s decision violates international law and is an attack on Ukraine’s sovereignty and territorial integrity. US President Joe Biden has held talks with the heads of state of France and Germany.

I have signed an Executive Order to deny Russia the chance to profit from its blatant violations of international law. We are continuing to closely consult with Allies and partners, including Ukraine, on next steps. pic.twitter.com/ZS81ivAPgs

It is said that they have unanimously agreed upon retaliation in the talks. Britain has demanded tougher sanctions on Russia.