Hindus living in other countries promptly unite and actively oppose anti-Hindu activities, whereas Hindus living in India meekly watch ! Realise that anyone starts spitting venom against Hindu Dharma and their seats of worship due to the lack of pride amongst Hindus in India towards their Dharma. 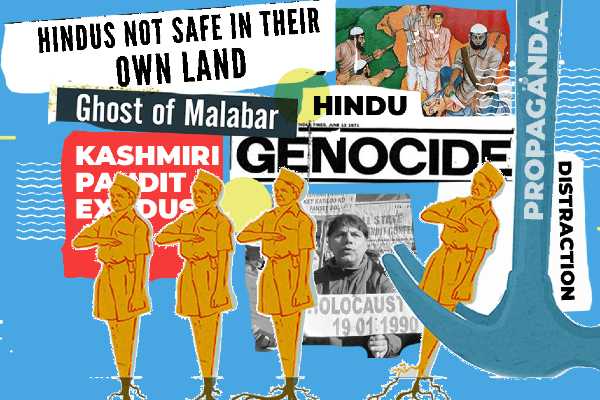 New Jersey (US) – A representation has been sent to 40 Universities by 150 Hindu organisations including temples and spiritual organisations in the US and Canada urging them to oppose the anti-Hindu ‘Dismantling Global Hindutva’ Conference. Several students studying in these universities that are co-sponsors of this conference, their parents, and even their alumni have sent more than 1 lakh emails opposing such anti-Hindu Conference.

‘Coalition of Hindus of North America’ is an organisation that has coordinated between all the other organisations sending letters to those universities. The signatories of the representation are the members of Hindu temples, national-level organisations, various religious organisations of Hindus, and local cultural committees.  A copy of this letter will be forwarded to legal experts.

“The fact that 150 American and Canadian organizations from all walks of life have signed this letter illustrates the outrage within the Hindu community and our allies,” remarked Nikunj Trivedi, president of CoHNA. “It goes to show that a broad swath of Hindus have galvanized and are truly concerned about today’s biased discourses around Hinduism and the silencing of Hindu voices by calling us purveyors of extremist ideology.” Far from being an academic exchange of ideas, the conference features speakers who are on record for supporting violent groups like the Naxalites and Maoists, who have been declared as terrorists by the US State Department. Others have called for an end of Hinduism as a religion on myriad occasions and have openly disparaged Hindu deities, customs and traditions.

Yet, any Hindu who protests against such communist leaders being featured as speakers on 9/11 is accused of being an agent of a foreign government and a “Hindu supremacist.” It is therefore shocking that any university would lend its name to such an event while affirming its commitment to diversity and inclusion.

Indeed, the scale, volume and diversity of the letter’s signatories shows that, while the privileged organizers and supporters of the Hinduphobic conference have the megaphones on both academic and media platforms, they do not reflect the broader and mainstream Hindu community. What’s more, there has been a disturbing trend among academia, government bodies and corporations in the western world to start defining what does and does not constitute Hinduism – harking back to the days when colonizers attempted to define Hinduism and create policies based on a bigoted understanding of indigenous practices.

This is extremely problematic because Hinduism is a highly diverse, experiential and decentralized tradition, which has never been bound by the dictates of some elites – no matter how well off or well-positioned they are. Any attempts to draw boundaries around Hinduism/Hindutva based on political ideologies and misplaced understanding are dangerous and encroach on the civil rights of a minority religious community.

Furthermore, signatories expressed concerns that the perpetuation of bigoted language and resources which vehemently deny the existence of Hinduphobia, will intimidate and imperil minority Hindu students and faculty members on campuses. One can already see instances where Hindu groups and students raising concerns are being singled out and labelled as extremists. The disregard for safety is particularly jarring since many Hindu students on campus and young alumni are immigrants on temporary visas, thus making it highly unlikely they will report any abuse they face.

At a time when privileged academics with tenure are hounding young vulnerable students for something as simple as displaying the images of deities in their home offices, it is imperative for universities to ensure their safety and to foster diversity, equity and inclusion for all. Institutional support for bigotry in the name of “academic freedom” achieves the exact opposite effects and legitimizes hatred against Hindus.

CoHNA and the signatories plan to send a copy of the letter to lawmakers, given that many of the universities are recipients of federal funding.