Trinamool Congress leaders who bring discredit to democracy! One can only imagine what such leaders will do if they become representatives of the people! Will the secularists ever raise their voice to oppose such leaders? 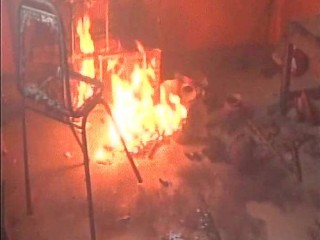 Kolkata – Preparations for the upcoming assembly elections are in full swing here. Trinamool Congress has announced its list of candidates. In South 24 Pargana’s Bhangar region, one of the TMC leaders Arabul Islam was denied a ticket. While Arabul Islam voiced his opposition on social media, some party workers attacked the party office. Some of his supporters also blocked roads. Likewise, Rafikur Rehman, who has already been an MLA twice, was also denied a ticket. His supporters also blocked the National Highway 24 in the North 24 Pargana area. The national highway was completely blocked for over 2 hours. Th police had to be called in to remove the protestors. .

Sonali Guha, a four-time MLA from Satgachia, was also denied a ticket. She has declared now that she will join the BJP. (Despite being an MLA for four times, she has not yet given up her greed. Can such leaders ever teach the value of sacrifice to the common citizens? – Editor)