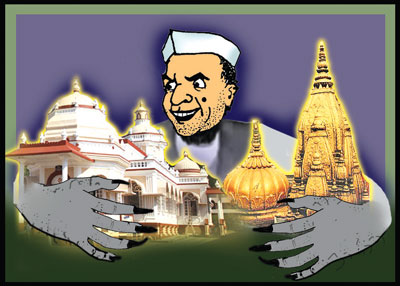 It is a disgrace for Hindus that in a Hindu-majority India, Hindu Saints have to intervene to remove Government control over temples.

All sects and Hindu organisations need to unite  to bring the temples back under the management of devotees. If a few thousand farmers can come together at Delhi and stall the Government’s functioning, why can crores of Hindus in the country not do this for temples ?

New Delhi – ‘We live in times where we understand the Government should not manage airlines, airports, industries, mining, trade but then how is it that sacred temples are managed by the Government ? What qualifies them to do so ?’ questioned Yoga Guru and mystic Jaggi Vasudev (known as Sadhguru). He was being interviewed by Anand Narasimhan for CNN-News 18. (This interview is available on YouTube). Excerpts from the interview are given ahead.

In 1817, the East India Company implemented the Madras Regulation – 111 to regulate temples, which was later withdrawn in 1840. Then in 1863, the Religious Endowment Act was introduced. The temples were handed back to the Hindu community. Trustees governed the temples, and Government intervention was minimal. The temple money was utilised only for temple work and hundreds of temples were operating according to these laws.

The British Government at that time enacted ‘The Madras Religious and Charitable Endowment Act 1925’. This included all the religions, as the Independence movement was gearing up, they wanted control over all religious gatherings. There was vigorous resistance to this from the minority communities, and the British Government placed them out of the ambit of this law and a new law was enacted, called the ‘Madras Hindu Religious and Endowment Act – 1926’. (It is a fact that Hindus do not protest firmly, hence the rulers do not pay any attention to the opposition from Hindus in the country ! – Editor) In  1935, the British further tightened the noose which enabled the State to take over any Hindu temple.

After Independence, the Tamil Nadu Government passed a new law called the ‘Hindu Religious and Endowment Act’ in 1951. This law was challenged by the Muths and temples in the Madras High Court and later in the Supreme Court. Consequently, the Government had to remove many Sections from the Act.

In 1959, the present Tamil Nadu Hindu Religious and Charitable Endowments Act was enacted. According to this, any temple Trust was to be headed by a Commissioner and about 60 to 70% of the donations received by the temple were to be spent on administrative work.

Today, the Tamil Nadu Government controls 38,449 religious institutions and temples. The Government controls places of worship belonging to only one religion. You would never have heard of such a thing happening in any other country. One often comes across comments such as ‘why only Hindu temples, even churches, Gurudwaras and mosques should be under Government control’. In my opinion, the Government should refrain from interfering in the activities of any religious place in a secular country.

Places where millions of people always go due to their faith and belief should be independent. This should be done to protect their human rights. Some claim, ‘temples were under the control of kings in the past. Now they are in the hands of the Government’. This is not true. The king was a devotee. In many Kingdoms, the Deity was the king, and the king served as a minister of the Deity, and the minister ruled only as a representative of the Deity.

The Government-controlled temples are in a very bad state. This is particularly true of South India. The temples in Tamil Nadu were very beautiful. The valuables of some temples have now been stolen. The temples had beautiful artefacts and huge carved stones; they have been silver painted. Everything is getting destroyed since people’s feelings are not so strong. Therefore, temples in Tamil Nadu should be freed from Government control.

If you build a new temple in Tamil Nadu and if it becomes popular, the Government will immediately send a notice to control it; this is ridiculous. How can this ever happen in a secular country ?

The science of temple construction has been destroyed. Is it not a violation of fundamental rights ? Now the time has come to free the temples. People say that ‘this will promote corruption.’ I find it outrageous. Can we not properly control our places of worship ?

Author and scientist Subhash Kak supported Sadhguru Jaggi Vasudev’s demand. He said that Sadhguru has raised the right question. There is no logic behind Government taking control over temples. This principle is damaging the politics of the country and corrupting administrative services.

Actress Kangana Ranaut also supported it saying “If you have the time, you should watch this interview. It is very important”.

Responses in the social media

Sadhguru Jaggi Vasudev’s views on freeing Hindu temples are also being supported on social media. Here are some reactions on Twitter.

A Twitter user tagged Yogi Adityanath, Chief Minister of UP, the Prime Minister’s Office, Union Home Ministry, saying, “Please listen to Sadhguru”. To free Hindu temples throughout the country, the Government should enact a law like the Gurudwara Prabandhak Committee Act of 1935. It is not enough for Prime Minister Modi to lay the foundation stone of Shriram Temple, there is an urgent need to free the temples also.

In States where so-called secular parties are in power, they are being given the opportunity to misuse the temple funds. The Governments of Maharashtra, Andhra Pradesh and Kerala are examples of this. The Courts are also unable to help in these cases.

Democracy is being used to destroy the Hindu culture. Christian missionary activities have increased in Telangana, Andhra Pradesh, North Karnataka and Tamil Nadu. They are building churches in villages where there are no Christians. All this is going on with the support of the Government.

The Government either frees the temples or controls the religious places of all religions. Discrimination against only one religion is not acceptable.

We are living in a time where Hindus who have become alienated from Dharma think that they can govern the country and big businesses but cannot govern their own temples.

Hindus alienated from Dharma think that they can govern the country and big businesses but not their own temples !