The permission granted as a response to the hearing of review petition presented by HJS and other petitioners !

Congratulations to HJS and other petitioners for their judicial fight for not breaking the tradition ! O’ Hindus, let’s express gratitude towards Lord Jagannath for this success ! New Delhi – Supreme Court has allowed Lord Jagannath Rathyatra to be held on 23rd June at Puri (Odisha). The bench has made it mandatory to hold the Rathyatra in coordination with temple committee, State Government and Central Government and by following the guidelines of Ministry of Health. The Court had imposed stay earlier due to Corona pandemic. Six review petitions were filed against this stay. Hindu Janajagruti Samiti was one of the petitioners.  The Rath Yatra tradition is being followed since 13th century. If the Rath Yatra would have been stopped then that would have been for the second time in last 285 years. Earlier the procession was stopped once by Moghuls.

The petitioners requested the Court that ‘let there be a second thought to grant the permission for Rath Yatra by changing the pattern of Rath Yatra. The Rath Yatra can be held by adhering the shut down in the whole Puri city and stopping the outsider’s entry to the District.’

The tradition with the history of centuries cannot be stopped ! Central Government

The Central Government stated at the time of hearing of this petition that the Rath Yatra can be held without the participation of devotees. The tradition with the history of centuries cannot be stopped. It involves sentiments of crores of devotees. If Lord Jagannath does not come out of the temple tomorrow, He cannot come outside for 12 years as per the tradition.  The Government has imposed several restrictions considering the Corona pandemic. The procession can be held with adherence to these rules. The priests who have been found to have tested negative with respect to Covid-19 can participate in the procession. The procession can be held without congregation. With all the necessary precautions, the State Government can declare complete shut down for a day. Devotees can watch the ritual on television. The King of Puri and temple committee would look after the management of all the points.

Supreme Court stated earlier that, ‘Lord Jagannath would not pardon if Rath Yatra is allowed !’ 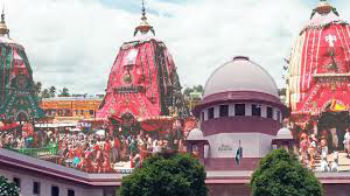 Odisha Vikash Parishad a private organisation at Bhuvneshwar had filed a petition saying that, ‘allowing Rath Yatra can spread corona. The Court had banned use of crackers in Diwali before then why an order cannot be set for the stay of Rath Yatra?’ Supreme Court had imposed stay as response to this petition in the 18th June order stating that, ‘Lord Jagannath would not pardon us if the procession in such a corona pandemic is allowed. A procession inviting congregation cannot be permitted during corona pandemic. The decision has been taken for the safety of people.’

With His Blessings and planned efforts of Hindu organizations like @HinduJagrutiOrg, advocate Subhash Jha among others, Hindus emerged victorious. We will be able to celebrate #RathYatra

The Supreme Court nod to Puri Rathyatra on the plea filed by Hindu Janajagruti Samiti is success for Hindus ! The Puri Jagannath Rathyatra is a world-renowned devotional event that has a history of centuries. Due to the ongoing Covid-19 pandemic, on 18.6.2020, the Supreme Court of India while hearing a Public Interest Litigation filed to oppose the Rathyatra had directed that no Rathyatra will be conducted either at the Jagannath Temple at Puri or anywhere else in the State Of Odisha.

Hindu Janajagruti Samiti had filed an intervention application seeking modification of the order as the Rathyatra could be performed even by following all necessary norms such as social distancing etc. ‘The extreme necessity for a complete ban was unjust and was not evident from the records’, the plea stated. Many other petitions were also filed seeking modification of the order dated 18.6.2020.

While considering the pleas raised in the intervention application as well as the statements from the Central & Odisha Governments, the Supreme Court has allowed Rathyatra of the Shree Jagannath Temple to proceed as planned.

Hindu Janajagruti Samiti has thanked members of Hindu Vidhidnya Parishad as well as a senior advocate in the Supreme Court of India, Shri. Subhash Jha for taking up the matter on behalf of millions of devotees.