One who doesn’t have faith in God, Dharma, seats of worship of others, has no right to criticise these things of others !

1. Court suggests that Indian legislature should declare Shriram, Shrikrushna, Ramayan, Mahabharat as the main source of Indian culture and our national heritage

On 6.10.2021, Honorable Justice Shekhar Yadav of Allahabad High Court in Uttar Pradesh was passing an order on the bail application of Akash Jatav from Hathras. Akash Jatav had criticised Shriram and Shrikrushna in a very derogatory manner on social media; hence, a criminal case was filed against him. The lower Court had denied him bail, and he applied to the High Court for grant of bail.

In his order, Justice Shekhar Yadav said, “The Indian Constitution gives freedom to every citizen to have faith in God or not to believe in God; however, a person who doesn’t have faith in any person, God, Dharma, seats of worship of other people and ideals, has no right to criticise these things of other people. The Constitution doesn’t confer such rights on them. When such criticism results in the slighting of people’s faiths, it can lead to violence, disturbing social peace and law and order”.

In the same order, Justice Shekhar Yadav said that the Indian legislature should declare Shriram, Shrikrushna, Holy scriptures such as Ramayan, Mahabharat as the main source of Indian culture and legal heritage. This was not acceptable to the anti-Hindus. Justice Yadav, however, granted bail because this was a criminal case and there was no guarantee of how long the case would go on and when will the case be decided.

2. Suggestion to have a law to prevent denigration of Hindu culture, Deities and seats of worship

Justice Shekhar Yadav said, “Shriram, Shrikrushna, Ramayan, Maharshi Vyas (Author of Shrimadbhagawad Katha) and Maharshi Valmiki (who wrote Ramayan) are integral parts of Indian culture; therefore, the Parliament should pass a law to venerate them at the national level. The objectionable statement made by Akash Jatav on social media has insulted the seats of faith of the majority. Such people will become bolder if Courts take a soft stand against them”.

One point can be noted from the order of the Court that religious freedom is more important than the freedom of expression. Unfortunately, there are no stringent laws in India against denigrating Deities; therefore, offenders in such cases are not punished severely. This has led to making of advertisements on variuos mediums that grossly insult Deities; for example – showing Deity Shiva wearing goggles; showing different products in Shri Ganesh’s hands during the Ganesh festival. Advertisements on social media, news channels and newspapers even during other Hindu festivals denigrate and make a mockery of Hindu Deities.

Despite opposition many times, even Maharashtra Police try to teach traffic rules to people with Deity Ganesh as a medium during Shri Ganesh Chaturthi. Will they do such things if it were to be related to non-Hindus ?

Till a law is passed to prevent denigration of Deities, stringent sections are applied and offenders are punished severely, denigration will not stop.

Many countries have stringent punishment for denigrating Deities, but in India, punishment for such crimes is minor. Therefore, anti-Hindus are not afraid of criticising Deities of Hindus on social media. The Central Government and the Parliament should make necessary provisions as suggested by the Court. 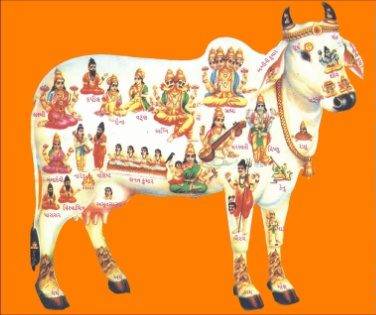 3. Suggestion that the Central Government pass a law to declare cow the national animal

In a case of refusing bail to a butcher, Justice Yadav had said recently that the butcher had slaughtered a cow; therefore, he couldn’t be granted bail under the prevailing laws on this issue in Uttar Pradesh.

Justice Yadav was pained to know the facts of cow-slaughter and said, “The Central Government and legislature should pass a law to declare cow as the national animal”.

While explaining the importance of ‘Goumata (cow)’, Justice Yadav said that many scientists have proved cow to be the only animal that inhales carbon dioxide and exhales oxygen. If we stay with cows, many incurable diseases will get cured.

4. Cow is useful for humans; hence, as advised by the Court, the Central Government should declare cow the national animal

Earlier, medical science was not so developed as it is today and there were different serious diseases. There were epidemics – smallpox, chickenpox, measles, malaria, plague, etc., and millions of people were affected in such epidemics. Villages used to become deserted. A hundred years ago, people in an area left their houses to stay on farms out of fear of plague as it used to spread more through fleas on the death of rats. All medical systems had failed to control the plagues.

There is this story – Cowherds used to take cattle for grazing. They felt that they wouldn’t be affected by smallpox because they were in the company of cows. Scientists too started thinking about the reasons for the spread of smallpox; whether the epidemic would spread if one remained with cows, etc.

Scientists then proved that diseases like smallpox didn’t spread when humans remained in the company of cows. At one such time, smallpox had spread and millions of people had been affected. There used to be a danger of patients losing their vision and people were very scared. This proof has stood the test of time for centuries; therefore, if Justice Yadav is advising the Central Government to declare cow as the national animal, progressive people should not feel upset about it.

2. Hon. Justice Anilkumar R Dave of the Supreme Court had mentioned in a judgement that students should be taught Bhagawadgeeta, Ramayan and Mahabharat while they are studying in the Kindergarten and primary classes, because these ‘sanskars’ are our culture and our legacy and with such teachings, the students in schools will develop good character and culture.

4. In 2018, Justice Sudip Ranjan Sen of Meghalaya High Court had said during the hearing that after India’s Partition, two Nations were created; therefore, after 1947, India should have been declared a ‘Hindu Rashtra’. Many anti-Hindus and progressive factions were disturbed by Justice Sen’s statement at that time.

After Justice Sen retired, Justice Mohammad Yakub Mir and Justice HS Thangkhiew of the Meghalaya High Court set aside its judgment that called for India to be a ‘Hindu Rashtra’.